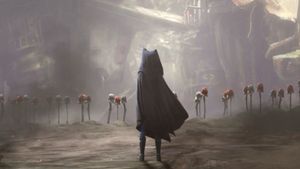 Henry and I watched Revenge of the Sith yesterday. I wasn’t that impressed the first time I saw it, probably in 2005. However, after finishing Star Wars: The Clone Wars, Anakin’s downfall is more poignant. In fact, the last four episodes of Clone Wars were excellent—maybe even sadder than episode 3. When you just watch the films, it’s more difficult to sympathize with Anakin’s plight. In fact, his lack of patience coupled with his arrogance is probably what condemns him and allows Sidious to so easily manipulate him. Anakin had several chances to do what was right, but Sidious’ poison was too strong. Interestingly, Anakin’s prescient dreams are what compels him toward the dark side and it’s false promise of a fountain of youth, but his own actions bring about his own self-fulfilled prophecy. He force-strangles Padmé when Obi-Wan appears in her shuttle: his fury at her ostensible betrayal fulfills his own premonition. It has both a Dune and an Oedipus Rex quality to it. Both Oedipus and Muad'Dib are instrumental in their own downfalls.

Whatever, now Anakin is Darth Vader, and we’re on to Star Wars Rebels.