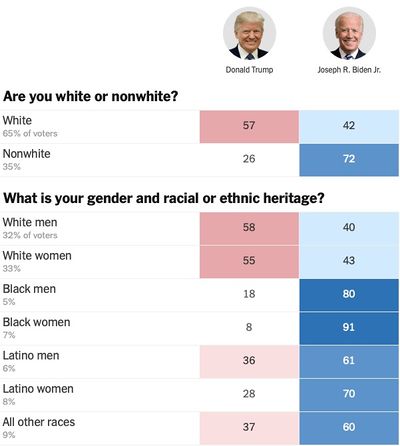 Via the New York Times.

We do know that the majority of white voters in this country are troubled. Apparently, support for ’Rump went up everywhere except white men. Imagine that. Even white women: voting for a proven sexual predator and supporting the patriarchy’s attempts to take away their rights—this goes for his non-white supporters, too. It boggles my mind.

About half of the white people you see in this country supported ’Rump. That makes me, a middle-aged white guy, nervous. Imagine what it does to someone who’s not. Where is the disconnect?

Other numbers of note: 62% of voters aged 18–29 (17% of voters) voted for Biden, as did 55% of college grads (non-college folks are split down the middle). I’m in the 45–65 demo, 50% of which voted for Biden. I would have thought my generation was a bit better than that. Married people favored ’Rump at 54%? Explain that one, please. The most telling numbers are “white evangelical or white born-again Christians”: 76% support the Orange Messiah. This all comes from the same place as religion. What else could drive such blind, passionate devotion to this grifter? Seriously, this all has the revivalist stink of the megachurch fleecing its congregants for their minds and, even better, their money. Yeah, this is the current Republican Party.

This is so disheartening. Maybe I haven’t done enough? I’m pretty sure my whole family supports him. They all think I’m crazy: overly educated and obviously cracked. I used to think what I did in the classroom was enough. It most obviously is not. Subtlety is gone; nuance over. Higher education is turning into job training: who needs humanities, arts, history?

Folks, this is what you get: a nation where half the citizens are narrow-minded bigots with no conception of reality. After everything this guys has done to this country, they still support him. It’s a crusade driven by a righteous faith where these zealots won’t be happy until all of us infidels are killed or driven hence.

It that what we have here: an American jihad birthed from white supremacy, cammo trucks, nationalist bile, and heavy artillery? What the actual fuck?

Still, Biden looks like he might pull this off, yet even if he does, we likely won’t get a Senate majority and a decreased representation in the House. So what will actually change?