Today was cloudy and threatening, but the weatherbot said rain would not come until the evening. I decided to don my riding armor and join Autumn and Henry for a journey to Perry to see Cason’s new house. They, of course, would be driving. 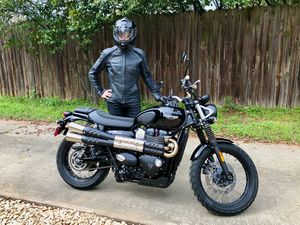 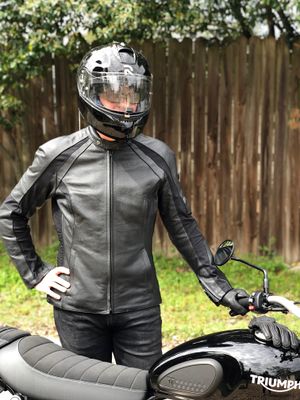 First, the Scrambler was in need of a well deserved bath. This bike looks so good when it’s shiny.

I took the usual back roads—south on Tucker, then Heath, then Fulton Mill, then Boy Scout, then East Heritage (in Byron), then Walker. I turned east on Lakeview, but viewed no lake though there were lovely peach blossoms along the way. South on US-41 to Macon Road into Perry. While it was a bit chilly for part of the way, by the time I reached Cason’s house just south of Perry’s Main Street, the sun had poked out a bit and the wind died down.

After a tour of the house—a great starter home for Cason and Audrey—I said goodbye to Autumn (Henry was napping and missed the tour), and I headed west toward Fort Valley on GA-341. About half-way there, my low-fuel light popped on. One thing I can say about this Triumph Scrambler is that the fuel tank seems much smaller than my BMW’s did. I feel like I’m always putting gas in this thing. The odometer was right at 1599 as I filled up, reminding me that my one-year service is due and how little I’ve ridden this bike in the year-and-a-half I’ve owned it. I’m trying to remedy that.

I continued west into Fort Valley, then turned north-east toward Byron. I began to get a bit tired as I approached I-75. Riding, like exercise, is something you have to build up to. You can’t just get on a motorcycle and ride all day—it’s fatiguing. My hand cramps, my legs ache. I start to lose concentration. Like running, you have to build up your abilities slowly. I took a break at the dealership where I purchased my Triumph, though it was closed. I walked around a minute and looked through the windows at the new bikes. I picked up Boy Scout Road and retraced my route, this time north.

Autumn and Henry are social distancing with her parents for a couple of days. This leaves me to finish a bottle of bourbon, leftover pizza, and catch up on some TV. I have read that tonight’s The Walking Dead is a good one.