Biden is ahead in Georgia and Pennsylvania this morning. That’s good news, so it looks increasingly like we’ll at least be rid of the tumor, but maybe not before it has metastasized. I’m still looking for explanations. I came across David Brooks’ editorial this morning, and his analysis makes a lot of sense—in fact it seems to be a very Mailerian perspective, if we consider the messages that voters given. 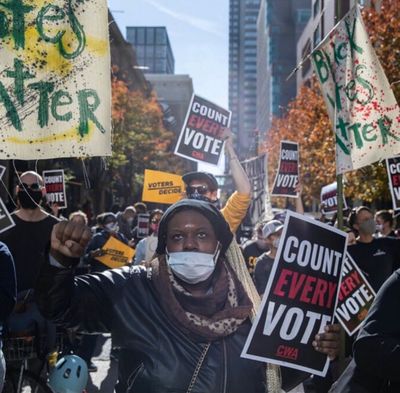 Unlike my analysis, Brooks’ suggests that they want religion removed from politics, see the quotation above, and the latter to be about “practical matters.” Fair enough, though I’m not sure exactly how he reached this conclusion, but maybe this gives hope to some of the younger progressives in the government.

Republicans, writes Brooks, “will be much stronger without the MAGA craziness.” ’Rump aside, the Republicans actually had a strong election, and “a possible future G.O.P. emerged — a multiracial working-class party. [. . .] because of the party’s reputation for championing personal agency and personal responsibility, and for boosting small businesses and economic growth.” Again, I like this positive outlook, but many (most?) high-profile Republicans are still on the ’Rumpwagen, defending his baseless claims of election fraud. This could be the time to free themselves from this nonsense, but they persist. Why, Lindsey?

The failure of the Democrats might, too, be because of their own religious-like attitudes:

I have heard this before. It’s not easy to dismiss, and perhaps part of the issue with my attitude toward the MAGAheads I’m surrounded by here in central Georgia. Have I been guilty of these attitudes, well probably. I’d like to think I’m capable of introspection and change; maybe I’m just as obdurate and inflexible in my 50s? Why do I know what’s good for others?

I think the frustrations I feel are age-old: the the system is rigged and that the Republicans are always rewarded for playing unfairly. Maybe that’s the nature of politics? If so, it runs contrary to local and quotidian relations. Aren’t we supposed to work together? To compromise? Do we really think that when Biden has a Supreme Court nominee, that McConnell will be fair in his treatment of him or her? It seems like we’ll find out.

Like Erin Logan states in her editorial this morning, ’Rump’s continued support “suggests that progressive policies important to my generation — like eliminating student loan debt, reforming criminal justice and addressing climate change — may not be achieved this decade.” Or ever. If anything, ’Rump has pulled the country way to the right, so even practical, achievable, and beneficial reforms and policies seem part of a ridiculous “radical left agenda.” Addressing these issues is not radical, and could bring more economic prosperity to the country, but they have been branded as “socialist” and dismissed by the majority of the Right. And it’s younger Americans that will continue to suffer the most.

I think Brooks may be a bit too sanguine. Logan’s assertion (actually her friend’s)—“I feel like the American empire is going to end in my lifetime.”—seems a bit more spot-on to me, too. As much as I would like to think that Republicans are reasonable, just their efforts to suppress votes show they are mainly interesting in retaining power, not supporting a democracy. If they had put the same effort in helping to control the Coronavirus as they have in stopping people from voting, we’d be in much better shape. Robert Reich reminded me this morning of the poll tax that Florida governor Ron DeSantis imposed upon 775,000 ex-felons who should have had the right to vote in this election. How can we be fair and level-headed—Michelle Obama’s “when they go low, we go high”—be effective against Machiavellian tactics? Is this Brooks’ “smug, self-congratulatory and off-putting” attitude that keeps the Dems from winning elections? Is it really that attitude or dirty politics?

This election continues to linger.