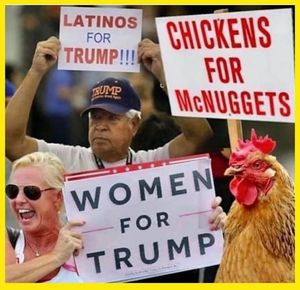 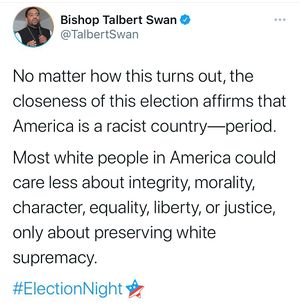 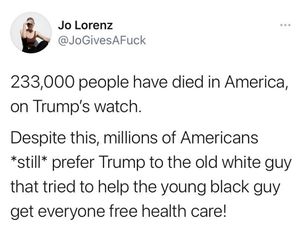 The election is close. I was hoping it wouldn’t be—to show that we Americans are not bigoted, racist, uninformed fools—but it seems that many of us are. What is this impulse that drives many of us to place fantasy above reality—ideology above what is right in front of us? It’s very disheartening. How do we proceed from here? Even if Biden manages to pull this off, it’s likely the Senate will still have a Republican “majority.” Would someone please explain the appeal of the Right to me? What is the thing that allows them to make policies (or do nothing at all) that injures the very people who support them? And these people continue to support them. Seriously, what is it? It certainly isn’t rational. Is this a new religion? Ya’ll Qaeda?

For example, Florida went to ’Rump—the climate denier. He and the Republicans will continue the corporate welfare to the companies that continue to pollute the world that has already led to the literal erosion of the Florida coastline. Some of these coastal communities voted for Biden, but the margin in Miami was much more narrow than it was in 2016. This is just baffling.

Another example: CNN was showing maps of the places most severely hit by the Coronavirus, and they were all deep red states. Even CNN’s exit polls privileged the economy over addressing COVID-19. One poll even had 49% of respondents say that ’Rump has been doing a good job handling the pandemic. What?

Seriously, what planet are these people living on? They are also likely about to lose their healthcare. I guess when the economy is the most important thing on you list, enriching for-profit health insurance companies is a much better goal than taking care of sick people. Incredible.

I do not agree with Bishop Swan’s sentiment exactly (see second meme), but I sure can see how he could arrive at that conclusion. I posted the other day that a ’Rump sign in your yard signifies your racism; I’ve seen other sentiments, like not all ’Rump supporters are racist, but his racism is not a deal breaker. To me, these seem to be saying the same thing. Time after time white Americans seem to be turning a deaf ear to African-Americans who are saying “stop killing us.” Seriously, what has anyone done policy-wise to address this racism? Quite the opposite: those who call for redress are demonized, called radical, and shown more violence and contempt. As a white person, I am truly embarrassed, but I do not represent my race, and other white people do not represent me. I think Mark Cuban warned a few years ago that if the privileged just keep taking and taking, that eventually there will be a revolution.

So, Republicans, how do we come together? What is the end game here? What is the version of America you will accept? We really want to work with you to make the country better, but we have to be sane here. Right? I think as long you see politics in religious terms, we will be at an impasse. I really think that’s what’s happening here: the religious radicalization of right-wing ideology and all of concomitant logical disconnects. There is only one god, ’Murica, and ’Rump is his prophet? Are you really OK with this?