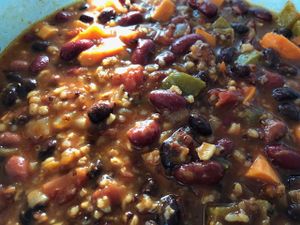 I started with this recipe and added my own touches. I wish I had some photos, because not only was it tasty, it looked yummy, too. I forgot to take photos of its creation, but here it is a couple of days later. I know: it still looks good—even cold. It tastes even better today, too; I have a big bowl for lunch.

I was concerned with the sweet potatoes, but they ended up complimenting the chipolte and ancho chili powder I used. The recipe called for quinoa, but a small bag was $11. So, I got a bag of pre-made quinoa, rice, and red beans as a substitute. Maybe that’s not expensive for quinoa—like all other grains it probably goes far—but I wasn’t gonna pay it. Research is called for, first. Trader Joe’s, anyone?

Autumn and Henry liked it—Henry might have liked my spaghetti better. Oh, and that was also excellent leftovers. Maybe I’ll type up my chili recipe, since I’m sure to try it again. I’m on a roll.

Next up: Mexican night with plant protein. And I want to try several of these recipes.