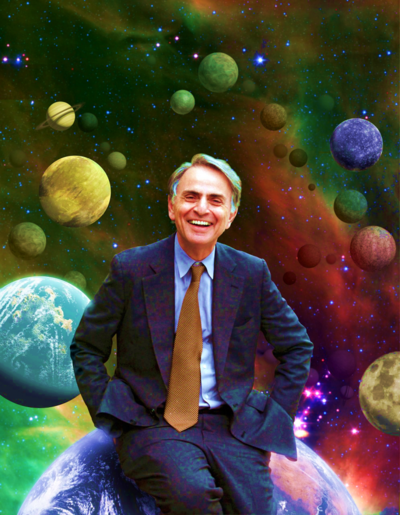 Contact was written by a scientist about scientists and science. It’s an interesting testament to the late-twentieth-century zeitgeist of multiculturalism, pop evangelicalism, super-power paranoia, eccentric billionaires, bleeding-edge science, and the human quest for understanding amid the noise of contemporary life. Contact is a science-fictional retelling of the Odyssey, but the role of Odysseus has been recast: instead the battle-hardened veteran returning from war and struggling through the vicissitudes that attempt to keep him from home, we have a woman radio astronomer, a misfit in a masculine field, who lost her father when she was young and has been trying to find him in her work ever since. Like Odysseus, Elinor Arroway is brilliant, but lost. She is trying to find her center by looking (listening) out into the universe for intelligent life, since most of those around her seem alien.

The novel is full of history, culture, religion, and science. It truly does seem to be a product of multiculturalism that was popular at the end of the last century. Sagan touches on many aspects of society and culture through Arroway’s eyes. Most of the time she is content to listen and absorb the stories she hears. When she acts, she is unsure of herself, like in the crucial meeting with the religious leaders Billy Jo Rankin and Palmer Joss. She expresses her religious skepticism—a skepticism that she argues is important for everything a scientist does—and concludes that god is sloppy for not making his desires more explicit: i.e., providing objectively measurable evidence of his existence. While this infuriates the evangelist Rankin, Joss seems delighted by her position. This will come back to haunt Arroway later.

I found Contact to be a bit robotic and cold, but maybe that was the point. The ending, too, seemed a bit cliché: journeying through the galaxy only to find the real, most valuable contact was the love between individuals: “For small creatures such as we the vastness is bearable only through love.” Extraterrestrials are cool and all, but if we don’t have our own shot together, what difference does it make? Contact laments a world of shit at the same time it celebrates its wonders.

I like that Contact celebrates intelligence and ingenuity, but shows the tremendous forces that work against it. Sagan seems to suggest that while some narratives might seem totally alien, that does not necessarily make them inferior—again that multicultural message. The big conflicting narratives in the novel are faith versus science, or belief versus evidence. Sagan does his best to respect belief, but ultimately an empirical approach wins the day. However, he seems to go to great lengths to show that the impetus for the search for god—the need for understanding the universe, is an inherent human quality. Ultimately it will be science that will gain greater insights and a unified version of truth. All the worlds religions have the feeling right: they’re just missing the facts to support it—the true explanation that will show god once and for all.

Here’s the interesting part of the book: while science aims for consensus, individuality is equally important. Science is about improving the whole of humanity, but love is about individual expression and connection. It’s when these narratives get crossed is when trouble follows.

Contact has two antagonists that provide warnings here: S. R. Hadden and Michael Kitz. The former is the eccentric CEO who becomes obsessed with science only for personal gain, and the latter is the political insect: a paranoiac who might mean well, but ends up shaping a reality based solely on his misguided and distrustful attitudes toward difference. They both share two traits that seem to antithetical to Sagan’s worldview: obsession and narcissism.

Hadden is the Silicon Valley entrepreneur turned billionaire. He seems to be be a positive figure with an eye to improving the world through his genius. While his initial success made him wealthy, the corporate forces looking to maintain the status quo seem to have forced him to retreat into himself. HE surrounds himself with a historical fantasyland based on the Sumerian culture seen in Gilgamesh, giving the first hint a story his motivation. He later retreats to a space station where the super-wealthy can purchase god-like residences overlooking the Earth. Finally, he builds a spaceship that he christens Gilgamesh (the second Gilgamesh spaceship of the summer) that’s little more than a sarcophagus. He fakes his own death in order to tie up loose ends, then he is launched into space, ready to free himself alive with the hope that some alien civilization will one day find and revive him. Crazy. Here is a man obsessed with immortality and the funds to chase it, so rather than using his wealth and power for the good of his community, he realizes that “all men are equal in death” and runs from it. Why do I feel like this is where Elon Musk is headed? Bezos? Is this the final corruption of money?

Kitz is more dangerous, as he directs his obsessive narcissism on the world. He has become the Deputy Secretary of Defense (an unelected position) and a sort of Grand Inquisitor for Arroway. This guy is totally believable, and Arroway beat into submission by his debriefing. He condemns her story as a hoax perpetrated by a group of scientists in league with Hadden who are “too clever.” He finally uses her argument against here: you have no evidence for your story, so it cannot possibly be true. He threatens her into silence, saying he will release a doctored dossier about her unsound mental state if she shares her story. He is the belligerent man of power whose own obsession with power and the dislike of “too clever” scientists have made him into a demagogue who will do anything to maintain his narrow view of world. On his final meeting with Arroway, Vaygay says:

Man, this sounds familiar—maybe even more germane today than it was in 1985. 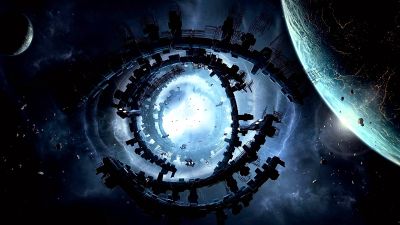 Counter to Hadden and Kitz is Arroway. What makes her heroic seems to be her romanticism and her endurance. The former quality provides her a sense of wonder and curiosity, from her early interest in the workings of an old radio to her later pursuit of radio astronomy. She pursues her quest even in the face of adversity: her father’s untimely death, her step-father’s remonstrations, her mother’s weakness, her teacher’s dismissal of her questions, her daring to be a woman with an opinion trying to break in to a male-dominated field, her being the director of the Argus array and standing up to men questioning her authority and knowledge . . . the list is practically endless. Yet, through it all, Arroway stays true, stays, well straight as an arrow.

Even though her realization that her experience at the center of the galaxy took on a religious significance, she is able to maintain her scientific perspective:

Her mind is not closed-off to new possibilities, like Kitz’, that threaten to undermine previously held perspectives. Like science, truth is a matter of evidence. That there was a message from Vega is a fact that could be corroborated world-wide; that she met a simulacrum of her dead father on a beach that told her they were engineering a galaxy becomes her religious experience, something that can only be confirmed by four others whose individual governments seem to have also silenced. Arroway has become a kind of prophet of the new millennium.

Another character who provides a contrast to Arroway is her short-lived love interest in the novel Ken der Heer, the president’s Science Advisor. They become close by working on the Machine, but der Heer, while also intelligent, curious, and romantic, is cowed by the system. Several times Arroway looks to him for support, and he is never able to come through for her, caught between his love for her and his duty to others. Unlike Arroway, der Heer does not have the fortitude to remain true to his convictions. He is beaten by the system and sort of fades away in the narrative, like other “half-loves” in Arroway’s life.

The Odyssey is about the hero who sets his lands in order for the good of his community—about the wise ruler who learns wisdom through his travels and suffering and brings these home to his people. He suffered so they did not have to. His quest may begin with an individual desire, but ends in a self-effacing altruism. Arroway is silenced and isolated by the end of the novel, but she is not defeated. She continues to look for “the artist’s signature” for the betterment of humanity. However, the ending is tinged with the pathos that often surrounds the hero: she has sacrificed her contact with fellow humans for the good of all.