Well, it seems the university will open this fall no matter what. As I mentioned yesterday, this is not driven by those of us who will be most effected, but by those who are buffered by their political and ideological positions above us. Because our “governor,” like the “president,” has declared war on a reality that interferes with our crumbling economy, we all must go back to work when we are woefully unprepared and under-supported (did I mention our budget cuts?). As I see it: this decision in no way benefits the university community other than bringing in money. Since the top seems to despise higher education—they have for years—this may be the death blow they have been waiting for. 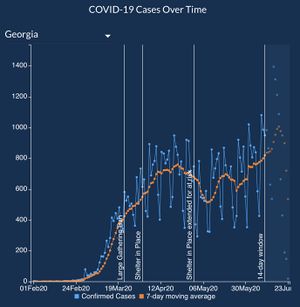 As the data from the GA Department of Health shows, shelter-in-place was working. Since Kemp has opened up the state again, cases of COVID-19 are on the rise again. What does this tell us? Am I reading the chart incorrectly? Notice that we’re already above where we were when shelter-at-home started. Where will we be in a month-and-a-half when the fall semester starts? Seriously, is there no point in arguing with this governor when he’s already made up his mind? Is he, like 45, just shutting his eyes and hoping the virus will go away? It seems we have gotten to the point that wearing a mask is a political statement rather than a pragmatic one. I’m trying to stay at home as much as possible, but when I do venture out for groceries, most white people are not wearing masks. Is it white-privilege, American arrogance? Or is it just people listening to their government with an uncritical acceptance?

In this political environment, even the bastions of reason that are state-funded are compelled to support this madness. Has the primary role of state universities become the support of an inequitable economy? Are we really just corporations whose value is measured solely on the revenue we collect? Is it all about quantity now? Enrollment? Retention? Graduation? Butts in seats; beds in dorms? Welcome to EduCorp.

. . . Where standardization can produce the robots for tomorrow: those we can pay just enough to buy our products and remain in debt so they need to work to maintain a way of life that has been packaged and sold by a corporate culture bolstered by a political ideology of the corporation that demands obedience, silence, and devotion if you want to keep your job, your car, your home, and all the stuff that makes you a true ’Merican. Here’s a syllabus that’s now so complicated you’re as likely to read it as you are an end-user agreement; use it for all your classes, as they are all the same now, preparing you in just days to be a cog in the wheel that votes against your self-interest because you are afraid those others threaten your materialistic world. Fear them. Give your life to the system. Freedom? It’s yours, but it must be purchased by selling your soul to the corporation. You must work the job, or what are you? Work all the time; buy the stuff—oh, and save for retirement or emergencies. You don’t want to lose you stuff, do you? Work hard and don’t cause waves and be obedient so you can get promoted—this means more stuff and maybe a two-month buffer to homelessness. Medical insurance? Well pray you remain healthy, because surviving cancer will bankrupt you; don’t get sick. . . .

If I wanted to work for a corporation, I would not have pursued a Ph.D.