Atlanta mayor has heard enough of 45: “Atlanta mayor says Trump ‘making it worse’ and should ‘just stop talking’.” Yeah, I’ve thought that for a while.

The Fascists are now designating the Anti-Fascists as a terrorist organization. From the Washington Post: 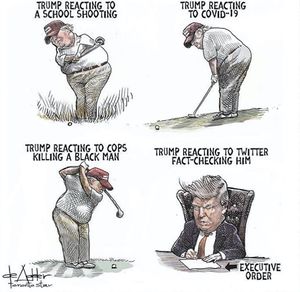 And 45 is angry that Twitter fact-checked him. So angry that he has signed an executive order targeting social media:

Twitter’s action comes as a response to “two of Trump's tweets, including one that claimed, without evidence, that mail-in ballots would lead to widespread voter fraud.” Has this guy ever shown evidence for anything? I remember lamenting what message the election of 45 sends to children and students. Mom told me at the time to “give him a chance.” It seemed funny then after the absurdity of the whole election, but bordering on dark humor now. In a country where belief seems to hold more sway than facts—especially when the former is screamed repeatedly—well, we see what happens. Nah, you don’t need supporting evidence, just a strong, unyielding conviction.

This notion goes against everything education stands for.

Is the system so broken that all we can do now is burn it down?

Thus brings an end to May 2020. Pretty dismal, yet let us sally forth into June! Excelsior! It’s getting hotter.