Today was wet, so I spent most of it reading. I also tweaked a muscle in my neck—something I seem to do at least once a year—limiting my movement. I figure it’s best just to rest, so that’s a good excuse to read.

The death of Neil Peart is still with me. The bandage might be off the wound, but I’m still aware of its presence and don’t want to reopen it. I’ve not listened to too much Rush since, and have skipped over tribute videos on my YouTube browsing. I know I’ll get to all that again, it just still seems too soon. 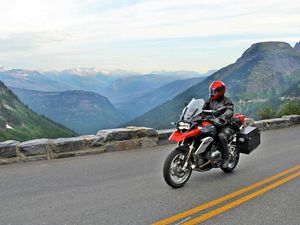 Yet, with my rediscovery of my love for motorcycling and the my recent purchase of a Peart-twin GS, I thought I my read some of his travel writing. I read Ghost Rider when it came out nearly twenty years ago (!), but I have not kept up with his subsequent books—at least four that I can see. I decided to start with the last: Far and Wide.

Like Ghost Rider, Far and Wide is about motorcycle travel literally and life’s journey metaphorically. Whereas the former featured a broken Peart using his journey to heal, the latter shows a healed and more mature narrator. It’s framed during Rush’s R40 tour and Peart’s motorcycle travels between shows. While not intentionally sad, it has an additional frame of his impending death that adds extra weight to a narrative about the end of an era. The theme of closure echoes throughout the book, bringing an urgency to the narrative. He realizes that with Rush coming to an end, so will his journeys by motorcycle. His narrative shows the toll that touring has on his body, but he pushes it even further to squeeze every last drop of life from his travels. It’s like he knows his end is near.

I find these prescient sections poignant. An early chapter addresses his vacations on the lake, and his relationship with his daughter Olivia. Here, Olivia seems like she might be four or five, and the spectre of Peart’s dead daughter Selena still haunts him. He wants to tell Olivia about her, but holds off maybe until she’s eight—or old enough to handle it. When I read this, I wonder if they ever had that conversation. Did Peart even make it to Olivia’s eighth birthday?

It’s not all sad, of course. Peart was a real adventure rider—always seeking “mystery roads”—usually unmarked and difficult-to-find dirt roads that aren’t on GPS, which he calls “Dingus.” In all his travels, he might have covered the paved roads, so the dirt ones are all that’s left. This guy lived in a way that only he could have, really. His support crew; his money; these bring him the ability to have all of these adventures. I do not begrudge him this, of course, but I will never be able to 5% of what he did on my motorcycle.

This book also makes clear that Peart was an eccentric dude. He calls Alex and Geddy the “Guys at Work” and contrasts his personality with theirs throughout. In fact, they are hardly in the book at all, as if they’re not even a major part of his life. His constant companion is his riding buddy, Michael, whom he hardy even seems to like very much. In fact, their whole relationship is confusing: I guess Michael is like Peart’s assistant, making hotel reservations, taking photos (many, if not most, of the photos in the book are by Michael), and going anywhere Peart wants to go. He also takes quite a bit of abuse that Peat presents as levity, but doesn’t always resonate as such.

OK, I don’t want to be too critical here: I do like the book. I like the sections where he addresses motorcycling, especially, like his two major rules of riding:

I’m reading this book on Kindle and only have about 10% to go. I really don’t want to finish it, knowing that it’s the last one he wrote. The book is full of photos of his travels, all in black and white because of the Kindle’s limitations. I wish I could see them all in color, like the one I posted here.