Raised by Wolves had an excellent first season, which I completed this evening. I was hoping more would be cleared up, but I think I was left with more questions, like what is up with the flying super snake? Who are the wolves? Who was raised by them? And why do they all have such terrible haircuts? 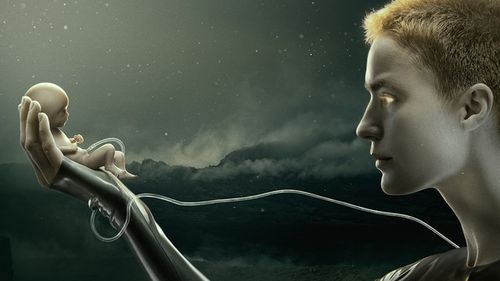 Wolves also shows a believable depiction of a delusional cult that is just the worst. What is it about humans that can destroy the world based on some shared fantasy of a divinity? Even the atheist posing as their leader loses it because he thinks Sol speaks to him. When you think you’re doing the work of god, it removes culpability and allows you to commit the most heinous of acts. Marcus/Caleb is pretty much lost by the end of the season, as is his “son” Paul. Along these same lines, in Aurora, one of the characters opines that their 170-year journey to Tau Ceti takes on a religious sort of life in many of the humans, so that when disaster happens upon their arrival, that zealotry has to be rechanneled. It seems there’s a religious center of the human brain pretty near the epileptic center, placing religion near a spot that might explain ecstasy in religious feelings and drives, producing an irrational righteousness that drives their convictions.

The voices that several of the characters hear during the season are probably coming from the original denizens of Keplar-22b: the snakes. This voice manipulates several of the characters for an unknown purpose: probably to regain their fleshy existence in some way. There are other humanoids on the planet, and I have no idea how they find into this. There are tunnels that seem to go to the planet’s molten core, but it’s more than that.

I suspect it will get weirder next season. I want Mother to get her eyes back.

I also suspect that the wolves would depend on the person watching the show. I would put the members of the Mithraic cult as the wolves, but the atheists seem just as nuts—we’ll likely find out next season. There was an allusion to Romulus and Remus whose story have obvious parallels to the show. While the twins were not raised by the she-wolf, they were saved by her allowing them to suckle. This suggests that there is something wild in the founders of Rome—especially as Romulus goes on to kill his bother later based on—you guessed it—a religious prophecy.