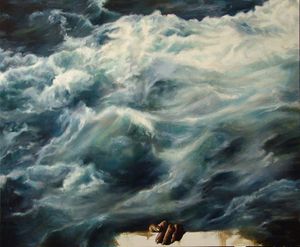 I spent my morning working on the Gilgamesh lesson for world literature. Making the quizzes and the test, I was thinking about the the damn flood again. Yes, it serves as a plot device to explain Utnapistim’s immortality, but it seems superfluous in many ways. It seems to make sense when viewed with the nature v. civilization theme in the epic: that a balance must be found to preserve an equanimity between nature and the growth of humanity. Simply: if the arrogance of humanity allows it to grow too large and too careless, something will be done to temper it. In Gilgamesh, the flood is caused by the god Enlil, a divine personification of wind, air, earth, and storms, who states the reason for the flood: “‘The uproar of mankind is intolerable and sleep is no longer possible by reason of the babel.’”[1]

Maybe we could read the flood as a pandemic of sorts, like COVID-19. It could be something that has been triggered by nature to attack the arrogance of humanity. No, I’m not attributing any sort of divine retribution here—indeed the god of the Old Testament blames “the wickedness of man” as his reason for sending the flood—but a sort of natural consequence of humanity’s carelessness.[2] No, we cannot do anything we want with impunity. There will be consequences for our actions, and the spread of COVID-19 is happening as a direct result of continued arrogance—our direct defiance of reality. The OT divinity continues: “every imagination of the thoughts of [man’s] heart was only evil continually.”[2] Perhaps the “evil” here is the wanton disregard for reality, the arrogance that allows not for empathy and compassion, but maintains this fantasy that mind will overcome matter.[3]

Is this purge necessary every so often? Is this a built-in self-correction in nature? Surely we’re not all guilty of this “babel,” yet we all seem to have to pay the price for the arrogance of a few. Sadly, it seems we elected these few to serve as our representatives. Maybe we are all guilty?