Dad wrote to me via email today.

There’s nothing unusual about that, really. His correspondence has decreased over the years. He used to be an avid letter-writer—and a good one. He took to email OK, but his electronic epistles never reached the quality of his snail-mail ones. In the last few years, I don’t get much communication from him. He’ll turn 82 this month, and he’s been losing his hearing for a while now which makes phone calls or FaceTime difficult. Like many elderly folks, Dad seems to be withdrawing from the world gradually. 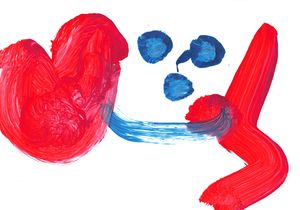 A clown? By Henry.

Part of his recent difficulties have involved some memory loss. I attribute 90% of this to alcohol. That said, he stopped drinking in 2014 and his cognitive abilities have much improved. However, there are some blanks in his memory which is where today’s email comes in.

Specifically, Dad asked me about two events that he any I attended together: his brother Elwood’s funeral in 1998 and his sister’s memorial in 2014. His request was simple: “When you have the time, I would really appreciate some details, starting with dates.” No problem, right?

I went looking for artifacts that could help my own memory. I knew I was in grad school when Elwood died, but I couldn’t find anything else to help. The trip to Ohio was a bit easier. Dad’s sister Nancy died six months (July 3, 2014) after her husband John (April 6, 2014). Instead of a funeral for either, their children and grandchildren arranged a memorial for both of them on August 16, 2014. Dad asked me to drive up with him. He suggested we share the driving responsibilities, but I did most of it from Pigeon Forge, TN to Newark, OH. Dad, as he is wont to do, started telling me stories. About half-way through the first one, I realized that my iPhone could record him, so I got about thirty minutes of goodness, dated August 15, 2014—a day (I think) before the memorial.

That’s not the rabbit hole, however.

While searching for said artifacts, I began to uncover other digital bits of nostalgia, including a PDF called “Descendants of Thomas Schley” prepared by Thomas W. Lucas, Sr. The entrance. Coupled with my look for what Dad asked about, I was sucked in.

So, I found a transcript of my grandfather’s diary from 1945 that Dad had sent a few years ago. I decided to post it, and annotate using the info in Tom Lucas’ (my cousin) ancestry research. It took all morning, when I really needed to be attending to other matters, like grading . . .

Tom’s document was fascinating, and I was able to annotate W. D.’s diary. It led me to thinking that I should do some documenting of what I know and what I could know. I asked Mom to send me a biography of herself, and I’m going to ask Dad to do the same. Then, I’ll enlist them to begin sending me info on what they know about their families. Maybe they’ll cooperate, but whatever I can get will be a start. I have some great photos; maybe I can get them to tell me about those.

I started a Family page. I figure I can begin a rudimentary family tree. I feel like I need to do some genealogical research first on collecting, cataloging, and presenting information. I need to find a good visual way to present the tree. Wikipedia has some. I think I’ll have a bio page for every family member, then a index to present the tree in a visual way.

Oh, lordy. What have I done?

Elwood died December 26, 1998. You flew down, I believe, because you paid for me to rent a red Mustang, so I could drive from Tampa to Ft. Pierce and act as chauffeur. I don’t think you specifically requested a red Mustang, but it worked out that way though a deal, or something.

The funeral was as expected: Dee and Elwoods girls spoke. I remember a couple of dozen attendees, many of whom came back to Dee’s for a reception. I believe both of your brothers came, though I certainly know that Harry was there, as he and I got into a—let’s say “discussion”—about the Microsoft antitrust trial happening at the time. Even after that, he did invite us to come see him in Texas. I wish we had.

That’s about all I recall from 1998. I wish I had written more down. Our trip to Nancy and John’s memorial is a bit clearer.

Again, our journey began with a rental—this time a Chevy Malibu—that I drove to TN to get you. We took turns driving to OH, and you told me some stories along the way. I have some of these recorded that I can send you, if you're interested. We drove up on August 15, 2014, for the memorial that was held at Jeff and Debbie’s house the next day. We stayed at Dave and Louanne’s house on the lake.

The memorial was very nice. Louanne, Tyler, and Barry spoke before you took the mic. You started with a joke—“I wish I had my T.V. here . . . because that’s where I left the copy of the speech I wrote for today” (or something like that). You talked about how much both Nancy and John meant to you in your life—how much John in particular helped you when you were young and making a move to Ohio. It was a good speech, and well received by all.

We socialized with the family into the evening, and I think we drove back to TN the next day. It was a good trip.

Retrieved from "https://grlucas.net/index.php?title=February_6,_2020&oldid=7161"
Categories:
This page was last edited on 8 February 2020, at 09:47.
Privacy policy
About Gerald R. Lucas
Disclaimers