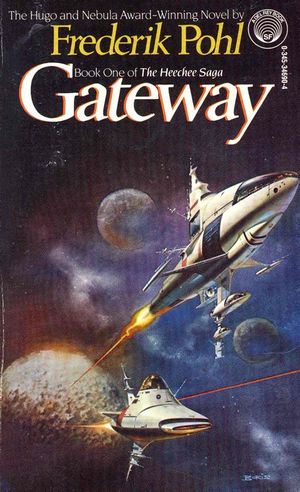 For my Labor Day, I finished my current novel: Frederick Pohl’s Gateway. I enjoyed it, though it was not available on Kindle (yeah, a Nebula and Hugo Award-winner that’s unavailable! WTF, guys?), so I had to read a crappy version that I had as an ePub which I converted to mobi. I really can’t stand these pirated versions full of errors, crappy formatting, and no link to Goodreads. Seriously, I’d rather pay for an official version and have it professionally remediated.

This is a character study of a psychologically unstable protagonist—probably a malignant narcissist who is good-looking, but almost perversely full of self-doubt and cowardice. He’s a sex-addict with mommy issues and takes that out on everyone he meets. He wallows in self-pity for much of the novel, and he has this antagonistic relationship with his A.I. shrink Sigfrid. The novel alternates between analysis sessions that take place in the current day and flashbacks to Robinette’s experiences on Gateway, an astroid base orbiting the sun that was abandoned millennia ago by it builders, the mysterious Heechee.

The sf elements are fun, and they make sense in a realistic way: humans stumble on abandoned advanced technology and start using it without much of a clue as how it really works. What do they use it for: to find more technology, of course. The prospectors, based on Gateway, are people who take Heechee ships out to find new technology in the universe. They do this with great risk to themselves (again, they just go with no idea what they’re doing, really), all hoping to strike it rich with a Heechee find that the corporation will pay them handsomely for. Crazy. But believable.

The narrative is told first-person by Rob(inette) Broadhead, who is sympathetic, but very unlikable. Much of the story is about his “destroying” time while he waffles about what to do: stay where it’s safe and comfortable, or rick it all for an unknowable outcome on a prospecting mission. He generally chooses to remain at Gateway, shacked-up with Klara, arguably his real love in the novel. His whole problem centered around his fear of loss, started by losing his first girlfriend Sylvia and then his mother while he was young.

Anywho, I was expecting more out fo the ending here. While he blames himself for trapping his crew in the event horizon of a black hole, I think it’s he that was actually trapped—at least figuratively. I kept waiting for this revelation, but it never came. Truly, he does seem to be caught in an endless moment: he is not living, but can only think off a time when he might have.

Still, this was a fun read, despite the copy I had being replete with errors. I might even pick up the second novel in the series.

Retrieved from "https://grlucas.net/index.php?title=September_7,_2020&oldid=12575"
Categories:
This page was last edited on 7 September 2020, at 14:25.
Privacy policy
About Gerald R. Lucas
Disclaimers