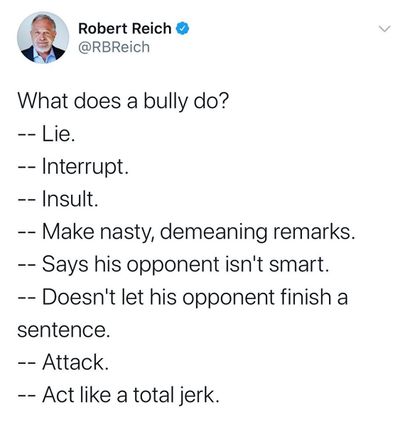 After watching as much as I could stand of the first presidential debate last night, I have come to the conclusion that ’Rump and those who still support him are stunted in their growth. They are adolescent playground bullies that seek only to denigrate, damage, and destroy what others have. Our country is now just an elementary school playground right out of Lord of the Flies. Our “majority” leaders[1] lack any regard for beauty and joy, wrapped up only in their pursuit of power for power’s sake. They are unhappy and want everyone else to be also. They seek ultimate power, even if it’s over a waste land—but it will be a waste land of their own making. Their imagination is as still-born as their capacity for mirth, and anyone else’s contentment engages them: especially if they feel you are undeserving—i.e., if you have darker skin, are poor, etc. etc. ad nauseam.

I think this speaks to the Senate Republicans, too. ’Rump allows them to show their real faces—a bunch of disease-ridden Dorian Grays. Their excitement does not come from rushing the next Aryan on the Heritage Foundation and Federalist Society SCOTUS short list nominated by an impeached, lying,[2] racist,[3] tax-cheating,[4] alleged-rapist[5] president onto the Supreme Court—no; their ecstasy comes from sticking to the rest of us. Brazenly and unapologetically, they revel in their hypocrisy and laugh maniacally at us for taking the “high road” when they win only by cheating,[6] or as Sabeel Rahman, quoted in the Guardian, states: “The central pillars of our democratic infrastructure are increasingly controlled by the right wing of a minority party that is overriding the urgent needs of most Americans. This is unsustainable—if this continues, we don’t get to call ourselves a democracy.”[7] This leads me to conclude:

This is all about making those of us who do not agree with them—a majority of the US—suffer. Plain and simple: they want us to suffer in the waste land they created. 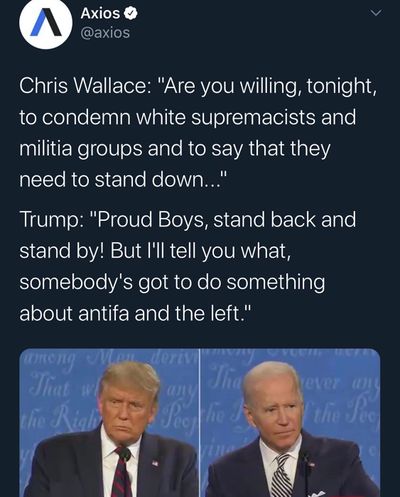 What else can the explanation be? The irony is that they hate their base the most. These idiots enthusiastically and ecstatically support messiah ’Rump even as he and the Republicans strip them of everything: economic security, health care, freedom, and dignity (if they ever had it). Oh, they can keep their guns and camo. 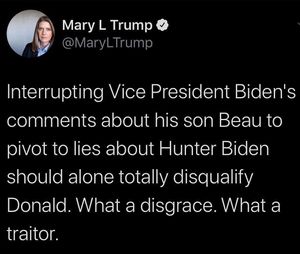 Mailer was talking about the Bush Administration and the Iraq War, but I would argue it’s gotten even worse with ’Rump. Man, I wish 1960’s Mailer were here today. Mailer’s main point here—the rise of a totalitarian government in America—has, perhaps, come to pass. That democracy is an endangered species, and it’s slipping away.

Biden reacted the only way he could with ’Rump’s constant badgering and spewing of lies: with incredulous chuckles. At one point he called ’Rump a “clown.” This is very fitting, for this clown has made the US his three-ring circus. It is a land of bullies now, and the rest of us on the playground seem still only able to stare at the absurdity and cruelty of this gang of thugs who have stolen their power and never truly represented the majority view of Americans.

Vote, folks. Damage has been done that will take generations to undo, but we must start now. Vote.