The Humanizing of Enkidu

At the beginning of The Epic of Gilgamesh, Gilgamesh is a tyrant and a poor king. He is two-thirds god, and that has become an issue for his people. In essence, he terrorizes them, like a malignant human might an ant hill or some puppies. 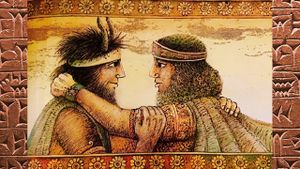 Rather than, as the men complain at the beginning, being a “shepherd to his people,” he kills the men and rapes the women.[1] The text implies that he does this, not necessarily because he is evil, but that he is singular—i.e., he has no one else to challenge him or to be his equal. Or, perhaps, no one to distract him from being a scumbag. Figuratively, Gilgamesh is only one-half of a person. Like a sociopath: he feels she is superior to everyone, so he is not bound by the moral codes of humanity. He is missing an integral quality that would make him a human being. This is why Enkidu is created.

Enkidu represents the human side of Gilgamesh—a part of him that’s closer to the earth. Created by Aruru, the great mother goddess of creation, literally “pinched off clay” to create Enkidu as a match for the tyrant: “let it be as like [Gilgamesh] as his own reflection, his second self, stormy heart for stormy heart.”[2] A mirror image to Gilgamesh, Enkidu is two-thirds animal, more child-like with a natural altruism that Gilgamesh does not share.[3]

At first, Enkidu must himself learn the ways of civilization, being “innocent of mankind” and “cultivated land.”[2] Both of these are significant, as the epic begins to define what it means to be human in the time of Gilgamesh. Here is the first clue: while some of the still hunt, agriculture is more important to civilization, and therefore being human. Therefore, before he can act as foil to Gilgamesh, he must learn the ways of humanity. A common theme in Mesopotamian literature is the conflict between the animal nature and human behavior, and Enkidu exemplifies this struggle as he is educated.[4] Indeed, it’s this emphasis on the acquisition of knowledge that’s important in the epic, rather than the heroic deeds the heroes will later perform, as education is what makes a civilized human being in the poem.[5] 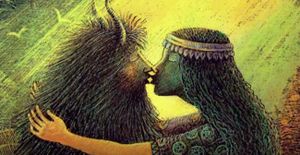 The “harlot” Shamhat[6] is brought in for the job. She plays an important roll, but the choice of labeling her “harlot” in this translation is unfortunate, as it suggests she is a common prostitute rather than one of acolytes of Ishtar’s temple: one of the “priestesses who give their bodies / to any man in honor of the goddess.”[7] Mitchell explains that there is no convenient English word for what Shamhat is: like a “reverse nun,” she is an incarnation of the goddess and a servant of eros who “dedicated her life to what the Babylonians considered the sacred mystery of sexual union.”[8] She is not a prostitute for personal gain, but uses her gifts for all who need them in a selfless way. In this sense, Shamhat uses her “love-arts” to temper and educate the animal nature in Enkidu and prepares him to go to Uruk.

Soon, too, Enkidu yearns for “a comrade, for one who would understand his heart.”[9] After Shamhat has educated him sexually, his mind begins to expand as his animal side diminshes. He tries to run again with the animals, but finds he cannot, and he begins to intuit just what he was created for.[10] Coupled with the curious dreams Gilgamesh begins having about Enkidu—his mother, Ninsun who is a minor goddess, says “you will love him as a woman”—the text suggests the importance male friendship. This promises to be no typical friendship, but one that is much more powerful, has suggestions of same-sex love, and is cemented with strong, spouse-like bonds.

Shamhat tells Enkidu of the glories of civilization in Uruk, clothes him, and takes him to see the shepherds. They offer him bread and wine, and he first fumbles, knowing only how to eat raw meat and suckle milk. Bread and wine are significant, in that they are both products of agriculture and take a certain skill and sophistication to make, thus they are strong symbols of the humanity that Enkidu is learning to embrace. Shamhat shows him how to eat the bread and wine, and, predictably, he overdoes it with the latter. Another facet of alcohol is that one must learn temperance in its consumption—another detail that makes it a human drink. Finally, Shamhat brushes his hair, and then “Enkidu had become a man.”[11] After dressing in more appropriate clothes, he “appeared like a bridegroom” ready to meet his bride (Gilgamesh?) one assumes. A human institution, marriage is a civilized affair—a contract and bond between tow humans, for life.

The use of bridegroom here has another significance. When Enkidu learns that Gilgamesh “demands to be first with the bride”—that is have sex with her before the husband—Enkidu decides to challenge Gilgamesh. Here, Enkidu the wild man seems offended that the king of Uruk acts so uncivilized, so immoral, so like an animal. He vows to do something: the next step is to humanize Gilgamesh, arguably what the epic is really about.

Retrieved from "https://grlucas.net/index.php?title=The_Humanizing_of_Enkidu&oldid=12303"
Categories:
This page was last edited on 28 August 2020, at 14:55.
Privacy policy
About Gerald R. Lucas
Disclaimers