Oh, man, I was so excited for today’s ride. I woke up too early, as usual. I had some coffee and did a bit of work before leaving Tim’s, about 09:00. Since the first part of the ride was basically interstate, I covered it as quickly as I could. I stopped for coffee at the Tennessee border in McCaysville, which straddles the Georgia/Tennessee border, about 10:30. After a caffeine injection, I was ready to get into some twisties. 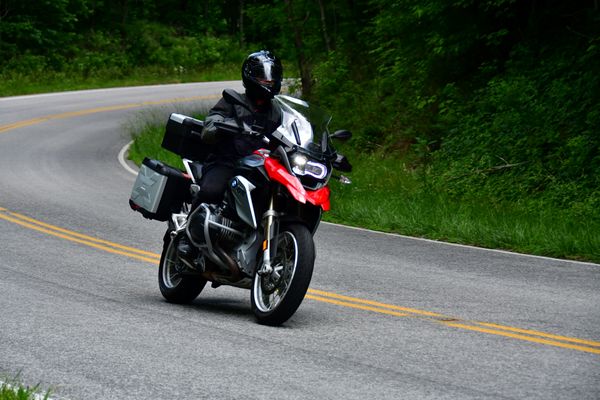 On the Cherohala Skyway.

The road, TN-68, soon delivered: after Ducktown, it was a twisty, up-and-down road to Tellico Plains. Unfortunately, about a third of the way in, I caught up to a mail truck that was determined to keep his position in front of me. No matter; it was a fun, leisurely ride to my next coffee break right at the western edge of the Cherohala Skyway. This is what I’ve been waiting for.

And the Cherohala did not disappoint. As I climbed, the temperature dropped. I started about 86°F in Tellico Plains and by the time I reached 5000+ feet, the temperature was reading in the low 70s. I think I even saw 69.5° at one point. I remember the Cherohala Skyway being more leisurely, but I found it to be fairly challenging to ride. I know I’m a bit rusty, but the long sweeps I remember were replaced by sharper curves. These two sportbike guys even passed me at one point. No matter, I was having a blast as the cool (almost cold!) blew through my vented jacket here on the top of the world. (Well, kinda high.)

A bit west of Robinsville, I turned north on a local road to scoot around Lake Santeetlah. On the map, it appeared to be a shortcut, but it was narrow and not very well maintained, so I’m not sure how much time it saved me. Still, the lake was beautiful, and I would have taken a photo or two, but I really didn’t see any place that was motorcycle-friendly to pull off. Or it could be I was anticipating getting to the Dragon.

I soon made it to Deals Gap, so I took a well-needed break. I poked around with the camera a bit and thought about getting gas. I figured I had enough to last, so I did not—a decision I would regret. I found it odd, too, that no one was wearing a mask. No. One. I might have looked out-of-place, but I kept mine on. After about a half and hour, I was gearing up to leave, and a guy told me that he heard there was a wreck on the Dragon and someone had died. It seems like every time I come through here, something like that happens. I asked if he knew any more, and he did not. Well, I have no other choice, so off I went. 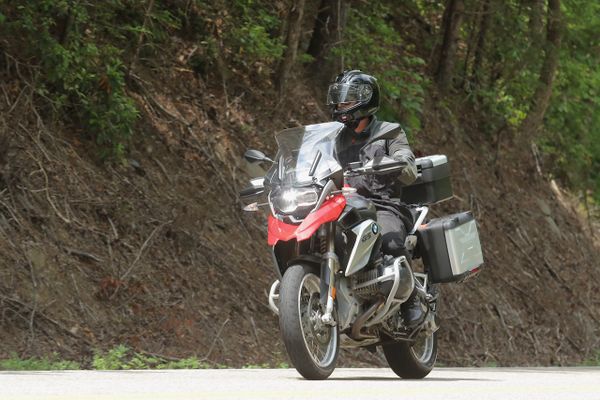 At first, I was hesitant. The Dragon is challenging, and I took it slowly and cautiously. Within a mile, I was more relaxed and confident, so I opened up a bit. While it didn’t register at the time, I was not passing anyone in the opposite lane, and there seemed to be no one behind me, so I had the road to myself. I think this gave me some more confidence, and my riding became smoother. I was getting into the zone. I really didn’t have to think about gear changes; I stayed pretty much in third, using the throttle and great torque of the GS to to negotiate the twists, turns, and short straightaways. At about mile 7, I was a Zen master and I, the GS, and the road were one.

Then, I saw a dude who looked like a cop on the side of the road, motioning me to slow down. I could not have been going too fast, surely, but I soon saw why as I turned the next corner. Traffic was stopped before a circle of flashing lights a couple of hundred feet ahead. Some other bikes had pulled off the road on a lay-by, and I even recognized one guy who had pulled out of Deals Gap about ten minutes before me. As I sat there, a group of Harleys came up from behind, and the lead bike pulled beside me. After a few seconds we all switched off our engines and got comfortable. It appeared we might be here for a while. 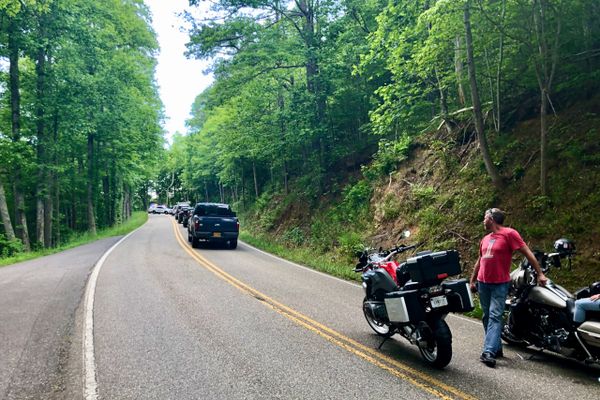 Wreck delay on the Dragon.

We were there maybe 30 minutes. I chatted with the Harley folks about riding. They were from Mississippi and apparently rode far and wide. He recommended riding out west. Yeah, it’s on my list. We were on our way after a bit, this time I was in a parade. We saw a crumpled sportsbike being loaded on a chair, and the ambulance that was on the scene did not seem in a hurry. That could not bode well for the rider.

We wound down the mountain together, and the road became straighter as it flowed around the Little Tennessee River. As we descended, my fuel light came on—this usually means I have less than 50 miles to the tank. Damn, I thought, I should have filled up at Deals Gap. I thought I had less than 40-or-so miles to go, so I might just be OK. It was a beautiful afternoon, and the sun reflected off the river as I gained speed. I saw the ambulance had pulled over ostensibly so one paramedic could micturate. Yeah, they’re carrying a full body bag.

I left the whole parade when I turned onto the Foothills Parkway. I was alone again, swooping east. This 18-mile tract of road is aptly named: to the right, there are beautiful views of the Great Smoky Mountain Nation Park, and to the right, a flat plain contains Maryville and Knoxville beyond. At one of my photo stops, the ambulance passed me leisurely, heading to who-knows-where. The Foothills Parkways was practically deserted, so this 18-mile ride was just beautiful after the stress of the Dragon. 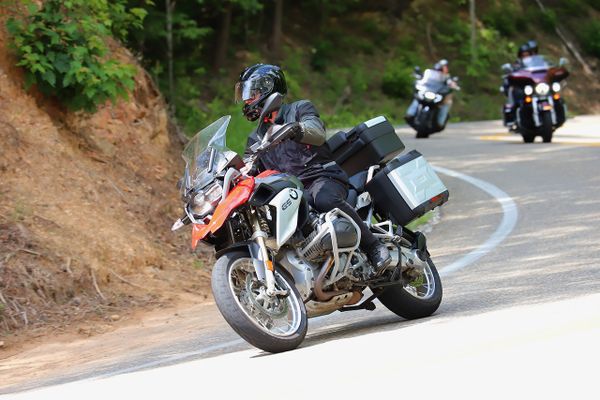 After the stop. My new Harley friends behind.

Nearing TN-321—the end of this section of the Foothills Parkway—I decided I needed to fill up. Maybe there was a gas station close, so I could come back to the new section of the Parkway I had never ridden before. Or so I thought at the time. Alas, it was not to be: I had to travel into Townsend for the nearest station, and because I was already delayed, I decided to just head to Dad’s via 321. I knew I had a few days up here to come back, so I knew I would.

It was a stunning day back in the mountains. This is what I love about motorcycling. Riding a bike truly is an adventure—completely different from traveling by car. A car isolates, makes you think of getting there, of listening to music or Podcasts, of taking the quickest route. Weather’s never really an issue, and there are few surprises. The motorcycle emphasizes the journey: deliberately choosing routes for beauty or fun or the out-of-the-way places to discover. It’s often fatiguing and inconvenient. A journey never really goes as planned. Weather is a real consideration, as are dense areas. This is as it should be: every ride is an event. Every ride is special.

Well, today certainly was, and I’m only half-way into my trip.