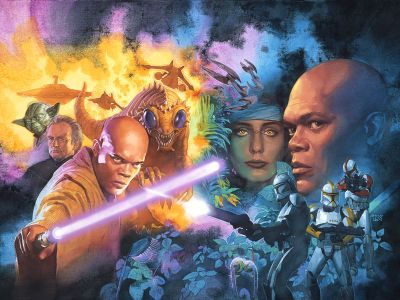 Henry and I finished the first season of Star Wars: Rebels last night. Watching all of this Star Wars and seeing how the series add new depth to the movies, I had the idea to read a SW novel. I know there are plenty—perhaps an understatement—so I just chose the one that was the most appealing: Matthew Stover’s Shatterpoint. The protagonist is Mace Windu—his is the lightsaber that says “Bad Motherfucker”—and after the introduction, it seems like it might be fun.

Because I like Samuel L. Jackson so much, I thought this novel might be a good one to start with. I also have Ahsoka, Thrawn, and Bloodline queued up if I like this one.

Shatterpoint seems to be a hefty novel, judging by the weighty intro. I already like the character of Windu: it seems to fit with the films and Star Wars: The Clone Wars’ portrayal of him—particularly the latter. I think I will enjoy his fleshed-out character in Shatterpoint. It’s a bit early to say more.