The Faith of Graffiti Notes 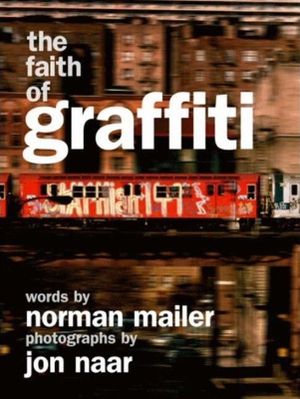 Norman Mailer links graffiti with his conception of the hip that he developed in his seminal essay The White Negro. For Mailer, the Hipster is one that challenges the status quo, often in violent, unpredictable, and creative ways. The Hipster is a subversive figuration—not morally good, but necessary to challenge authoritarian views that could lead to greater, state-sanctioned atrocities, like the holocaust.

Mailer, as the A-I, accepts the assignment to write about graffiti, interviews several retired graffiti artists, and discovers the importance of the “name.”

With photographer Jon Naar, the A-I interviews more graffiti artists. He describes the “existential stations of the criminal act”[12]: the process of “inventing” the paint, the clandestine travel, the fear that accompanies the act, and the verdant “profusion and harmony” that combatted the “high-rise horrors” with “wavelets of ego.”[13] Now, the authorities have cracked-down on graffiti, and it seems as if the “impulse to cover the walled tombs of technology had been broken.”[14]

The A-I visits MOMA for further insight (as the section is so short, we can infer he received little). He suggests that graffiti is a “alluvial delta” of the river or art,[20] and he then considers the artistic influences graffiti artists. He lands on a kind of artistic telepathy that he links to plants: “art begot art” by way of some “psychic sea.”[21]

4. “Plastic above, dynamite below”

A-I visits John Lindsay, the out-going mayor of NYC. In 1969, Mailer had run for mayor of NYC against Lindsay, thus his mentions of the campaign and what-if musings. Lindsay offers the official line on graffiti: it was “a dirty shame” perpetrated by “insecure cowards.”[22] Mailer contrasts the Federalist style of Gracie Mansion (an “economy of balance”[23]) and “the ugliest architecture in the history of New York”[24] that had been constructed under Lindsay with the perception that graffiti might inspire further criminality.

The A-I notes that the official reaction to graffiti “seemed personal”—that it exhibited a fury beyond what it deserved.[25] The subway graffiti, “defacement,” was “profoundly depressing,” for it seems to have tarnished Lindsay’s reputation and ruined his presidential bid.[26] While Mailer is critical of the Lindsay Administration’s treatment of graffiti, he does finally show sympathy, wondering what he would have done had he been mayor. He concludes that graffiti “as a political phenomenon had small hope for life.”[27]

The interesting part, here, is the reason why: the tourist’s uninformed view. He contrasts bathroom scribblings with graffiti, suggesting that the tourist cannot see the difference. For them, graffiti speaks of the shit just beneath the surface, promoting fear in those who see it. Graffiti was criminal, and those who held a paint can might also hold a knife or a gun. However, the true horror seems to be the “fear of the insane graffiti writer in the self.”[28] That all that separated them from madness and horror was picking up a paint can.

The city’s reaction, then, was to counter this potential horror in the public with the “new architecture” that offered a “deadening agent to the balance of the growing violence underneath.”[28]

The A-I, now become Mailer again (?) for his conclusion, muses on the state of art. It is commodity (“stuff with which to stuff the hole”[29]), something displayed in a museum,[30] a sociological experiment,[31] the artist’s body,[32] ego construction (“a clearing in the forest of the psyche free of dread”[33]), defiance of the gods,[34] the last vestiges of “Middle-class passion.”

Graffiti is perhaps the most germane expression of “the possible end of civilization”: it “speaks of a new civilization where barbarism is stirring at the roots.”[35] For Mailer, it seems to be a reaction against the deadening effect of bad architecture, plastic, and the “oncoming universal machine” of the “mass-man without identity.”[36] This expression of the slum and the ghetto shows “the courage to display your name,” but also belies a “more primeval sense of existence” that promotes discomfort and, perhaps, signals an apocalypse.[37]