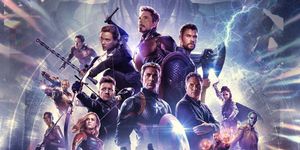 So I watched Avengers: Endgame this afternoon, and it was pretty epic. It ended a few major character arcs, but more came back than were killed or retired. I’m sure I could say why, since this film has been out over a year, so spoilers are likely irrelevant, but I’ll leave it ambiguous to encourage the one person who might stumble upon this journal entry who hasn’t seen it to watch the movie. Do it.

A couple of points:

I like ensemble movies like this, and Marvel does this right: these are huge with little opportunity for real character development. That’s why we have movies for individual characters. Man, the budget Marvel Studios must have.

There is a lot to unpack here, and I’m totally out of my element. I may just go back and watch all the Marvel Cinematic Universe: Phase Three movies again. In order. Maybe Henry would be interested.