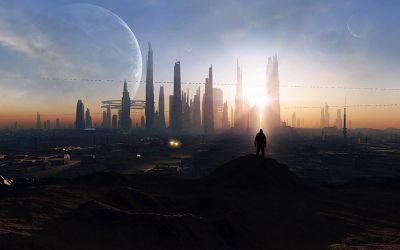 I’m still working my way through Le Guin’s The Dispossed and am really enjoying it. It follows Shevek, a physicist of some renown, as he tries to stay true to his values while others try to manipulate and control him for their own gains. It’s a bit od a stranger I a strange land story, as half of the novel takes place on Urras, the sister plant to his home Annares. Urras is pretty much our own contemporary society, full of “propertarians” who measures their success by personal wealth and possessions. It’s a reflection of our own capitalistic system where the disparities between the wealthy and the poor. The Urrasties seem only interested in Shevek’s theory that will help them achieve faster-than-light travel and secure their dominance over their own planet and the Hainish.

This novel has much to like: excellent character development, political intrigue, strong world building, and a story that is told expertly. Its density could be easily supplemented with a reference guide: it’s Dune-thick. I’m psyched to see what happens to Shevek.

Yet, I forgot to mention the novella I read after Aurora and before The Dispossessed: Neal Asher’s The Bosch. Essentially a tale of revenge, it’s got a ribofunky feel to it: advanced biotech is the cornerstone technology with all the grit and squishiness and violence that usually accompanies (post)cyberpunk tales like this one. As the title might suggest, it uses Hieronymus Bosch’s The Garden of Earthly Delights as the source of its nightmare: the planet’s avatar, Yoon, is raped, but she collects the sperm of her rapists to create the Bosch. These are like avenging angels who take the form of figures from Bosch’s painting, like the central figure of the Plague Doctor. Not only is there ultraviolence in the novella, but the planet’s avatar is hypersexual and badass, subduing all, even her guide Petod. In all, a fun afternoon read, especially if you like the work of Paul Di Filippo and Paolo Bacigalupi.