Another beautiful day. We needed more beer. I guess I had to go get some. I found this liquor store with a Google search for “best liquor store” just west of I-75’s Centerville exit and figured that might be one to try. The distance seemed about right, so why not? (I forgot my Leica, so all photos are with my iPhone.) 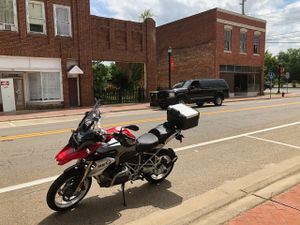 Along the way, I rode by the north bank of Lake Tobosofkee—lovely, but nowhere to take a photo unless you pay, then south toward Byron. I continued on GA-49 toward Fort Valley where I stopped for my first photo. Along 49, I saw signs for the usual suspects—Andersonville and the Jimmy Carter National Historic Site—but also one for Massee Lane Gardens. It was just off 49, so I decided to take a look. The place was deserted and it was getting late in the day, so I made a mental note to visit again. After snapping a photo, I continued to Marshalleville. Instead of following 49 west, I turned east onto GA-127 toward Perry. But first, a photo.

127 into Perry was lovely. It was mostly straight, but hilly, bordered by trees and farmland equally, there was even a perfectly manicured pecan orchard at one point. Just as 127 merged with GA-224, I caught up with this semi that had driven by me and my camera in Marshalleville. Predictably, he took I-75 south, and I continued into Perry. After another stop and another photo, I headed north on US-41 toward Centerville. After a couple of miles, I hit my first inconvenience of the day: a slow-moving dumptruck. I should have turned at GA-96, but for some reason I wanted to continue on 41. The dumptruck did, too. Deciding enough of this, I turned left on Russell Parkway and took an alternate route to my liquor store. 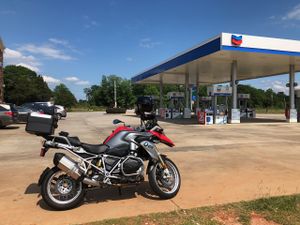 At the liquor store.

This “best liquor store” turned out to be tacked on to a gas station convenience store, so did not have much in the way of beer. Or anything. I bought an Italian fizzy water and drank it in the sunny parking lot. I looked at the map for a new road home, but little presented itself. I had intended to continue up 41, but we all know what happened there: truck blocked. So fizzy water quaffed, I took my usual road north (Walker) toward Byron. I continued on the usual route north considering where I should stop for beer. I was well back into Macon before just heading to Kroger.

Why does it seem to be mostly white guys who do not wear masks? Kroger was doing the business—it was after 5pm, so the crowd was probably mostly dinner shoppers. I grabbed my 12-pack and hurried out. I realized that I had not even bothered taking out my ear plugs, perhaps an unconscious desire to augment my social distance.

I arrived home well into cocktail hour, and I made a spicy BM (my drink of choice these days). After a quick chat with the family, I hopped on my weekly Zoom session with Kip. A great end to a great day.

This ride has just strengthened my desire to take a longer trip. I might just have to plan a trip to Dad’s real soon. I figured I could head to Tim’s and stay the first night, then head up and hit the Cherohala Skyway, Deal’s Gap, and the Foothills Parkway on the way to Dad’s. I could probably stay with them a couple of nights and ride during the day. Though most of the best riding is south of them, I could definitely discover some new roads. Yeah.