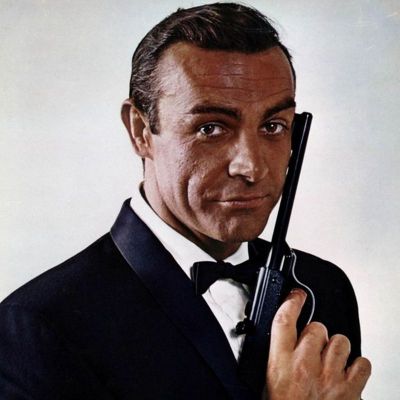 Even cool with a gun on his face.

Some of my earliest memories are watching old James Bond movies with my dad. Roger Moore was Bond in my youth, but Dad set me straight: Connery is the Bond. He convinced me quickly. I grew to see this Bond’s influence on my dad’s worldly perspective: his graceful cool was something I could see in my dad’s personality. They both are products of their time—some of these 60’s Bond films are cringeworthy today, as Autumn and I discovered a few years ago when we watched them all from the beginning.

The BBC’s obituary of Connery echoes this sentiment: “For many, Sean Connery was the definitive James Bond. Suave and cold-hearted, his 007 was every inch the Cold War dinosaur of the books.” Yeah, but he was still cool—maybe the definitive cool.

I “met” Connery once. It was in 2000 in NYC. Giles and I were attending the MacWorld Expo, and we were staying in his aunt’s building on the east side of town. The building had a small hotel for guests of residents. When we arrived, I was standing in the lobby waiting for Giles to check us in: I was a bit tired from the travel, but I remember someone briskly descending a winding staircase, jetting through the lobby out the front door, and jumping in a white van. I saw the action, but missed the details, like some cubist painting. When Giles returned with our key, he asked “Did you see who that was?” He indicated the absent van.

“That was Sean Connery,” he laughed.

I was a bit incredulous, staring out the door as if that would help me recapture the experience. “Damn,” I said, “he’s probably filming in the city.”

The next day, Giles and I were both standing in the lobby waiting to get our room key—you had to drop it off when leaving the building. We had been out the whole day at the expo, and I was thinking about dinner and drinks. I felt someone walk up behind us to join the key queue. Giles cleared his throat to get my attention, and I saw him motion behind me. I turned around and looked up to see Sir Connery standing there, waiting for his key like the rest of us peasants. “Hello,” he said, smiling. “Uh, hi,” I managed, and turned back around.

I kind of regret not saying anything more to him, but I didn’t want to be that guy. It would have been great the have had a photo with him—I’m sure he wouldn’t have minded—to share with my dad. I should have at least expressed my appreciation for his work and what it means to my dad and me and our relationship. An impression I was left with: he was a tall guy—or at least he seemed that way to me.

Connery once said: "My view is that to get anywhere in life you have to be anti-social, otherwise you'll end up being devoured." I knew I liked him for some reason.

RIP, Sean. And thanks.