Today was overcast and damp. I had a strong run this morning—over 5K, and a nap this afternoon. I made pulled pork in the Instant Pot which was good, if not the “best damn Instant Pot pulled pork” I ever made. I was hungry by the time we decided to eat, so I didn’t get any photos. I served it with bread-and-butter pickles, coleslaw, and Calhoun’s barbecue sauce on toasted sesame-seed buns. 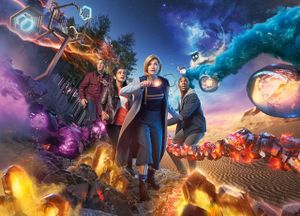 Henry fell asleep after dinner, so Autumn and I watched Doctor Who. We’ve been trying to get caught up on season twelve. I must say though, this season has not been very good. I think Jodi Whittaker is fine as the Doctor, but the episodes have been weak and the pacing off. We watched “Can You Hear Me?” tonight, and it was stronger—better character development and storytelling with a typical alien threat. We only have three more episodes, so I hope the season at least ends on a high.

I am looking forward to the next episode: “The Haunting of Villa Diodati.” I do seem to like the historical episodes the best—especially those that deal with literary subjects.