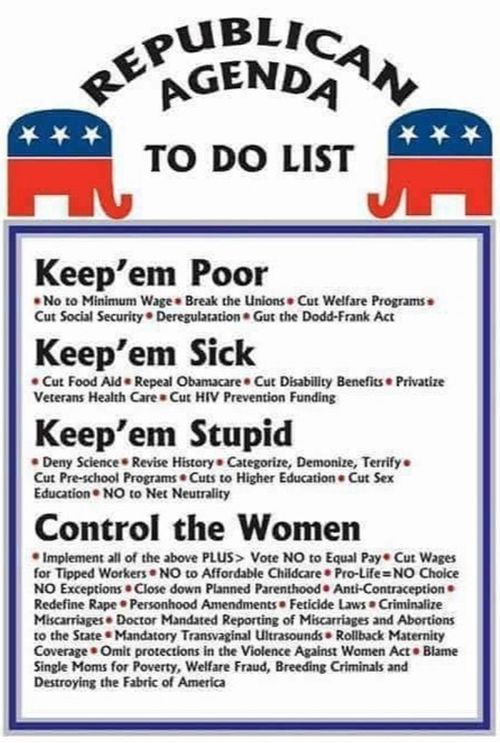 Republicans no longer have a platform, so this seems to do. I have no problem with conservatives; I just don’t like what the Republican Party has become. They are conservative in the most extreme sense: selfish power grabbers who think everything should belong to an elite class—one they guard the entrance to, but in a Neo-liberal way, suggest that if you work hard enough and play by their rules, you might just one day have the success to join. They have no problem using propaganda and fear mongering to stoke the prejudices and hate of the poor and uneducated to see other racial and ethnic groups as the problem, not the elites that manipulate them. The McDonald’s employee who wants a living wage, the immigrant who cuts your lawn, the single mother on welfare: these are the ones that you should hate, not the rich entrepreneur or CEO who you could be one day if you sell your soul by supporting Republican candidates.

They hate education, too, because educated people ask questions. Church and Fox News (just church disguised as “news” and critical thinking, but really just plays to the worst in its congregation) keep people superstitious and gullible. Real education challenges the status quo, so they are corporatizing higher education to make it job training, watering down the liberal arts to destroy independent thought, compassion, and empathy. In addition, college is integral to success, so the myth goes, and because of this, it is expensive. Loans keep people quiet and quiescent, enslaved to the corporate system. You better behave and follow the rules if you want to keep you house, your car, your identity as a good American.

There’s nothing moral in their platform. They are pro-birth only to control women, and more importantly, reproduction. They don’t care about women, really—only their ability to keep the patriarchy going. Since uteruses have all this additional baggage, well, they come up with disingenuous ways to keep women in their place. They only care about their lives: keeping drugs illegal, taxing and criminalizing poverty, maintaining capital punishment, attacking social programs, denying science, etc. etc.

They could never win an election if it were not for cheating: for gerrymandering, voter suppression, federal court packing, and stealing Supreme Court seats.

This is why I hope the Democrats are able to win a majority in the Senate, though I doubt it will happen. If they can do nothing more than election reform, we can start getting these right-wing radicals out of power and maybe challenge the two-party system that has controlled us for too long. (Again, since the Dems have a hand in this, I doubt it will happen.) If we can start a federal system of ranked-choice voting and ditch the electoral college, maybe the US can begin attacking some of these institutional issues that privilege hate rather than cooperation.

And for goodness sake: stop calling them the GOP. Seriously, there’s nothing grand about them at all.