Today we recycled our Xmas tree downtown and had lunch at Amici near the Mercer campus. I wrote a review on Google: “Definitely generic. Our server was friendly and knowledgeable. The hostess seemed to hate life.” I should have added that my sandwich, a Buffalo Chicken Sub, seemed to have arrived without sauce—Buffalo and Ranch. When I asked for both, I got them, but was also charged a $1. Autumn told me after I posted my review. I know: I sound like a crank. Another old-man moment? 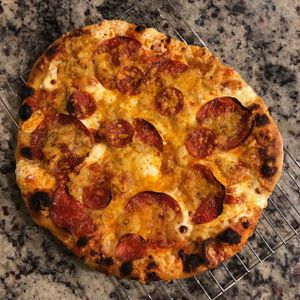 Later, we made pizza—a much more satisfying meal. Mine was double pepperoni, vodka sauce, and fresh mozzarella. Yes, it was tasty and had just the right amount of sauce.

I finished the first season on The Witcher tonight. It wasn’t bad. It became apparent about half-way through that the two narratives—Geralt of Rivia (Yennefer of Vengerberg) and Ciri—were taking place at different times. I think my problem with it is that unlike Games of Thrones it just had that stink of fantasy cheese about it. I’m also not sure I could follow everything. Yes, I inferred a few things, but I feel like little details escaped me. Also, I didn’t care for the episodic nature of the show, nor the uncertainty of how much time was passing—apparently no one ever looks older in this world. It was at its best when the two narratives intersected in the last episodes. Maybe this is where season two will pick up. Oh, if you’re into gratuitous female nudity, you should check it out.