Europa and Jove
By: Ovid from book 2 of the Metamorphoses[1] 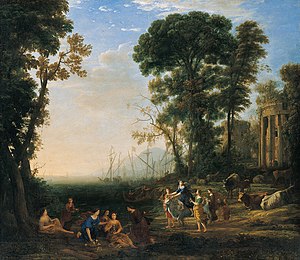 And when he[2] was in heaven once again,
his father, Jove, draws him apart and says
(though not revealing to his son the cause
for all of this—that is, the call of love):[3]
“My son, who always faithfully fulfills 5
whatever I may ask, do not waste time;
glide down to earth—be swift as usual—
and find the land from which your mother’s star[4]
is seen on high along the left-hand skies
(the men who live there call that country Sidon).[5] 10
You’ll see a herd (the king’s own cattle) grazing
far off, on a green hillside; drive that herd
down to the shore.”
He spoke—at once his words
were acted on: the herd was headed shoreward.
That beach was where the daughter of the king, 15
Europa, always played with her companions.

Now, majesty and love do not go hand
in glove—they don’t mix well.[6] And so, great Jove
renounced his solemn specter: he—the lord
and father of the gods—whose right hand holds
his massive weapons,[7] three-pronged lightning bolts, 20
the king whose simple nod can shake the world—
takes on the semblance of a bull; among
the herd he lows; he mingles with the heifers;
he roams the tender grass—a handsome presence.
He’s white—precisely like untrodden snow, 25
like snow intact, untouched by rainy Auster.[8]
His neck has robust muscles; from his shoulders,
his dewlap hangs. His horns, it’s true, are small,
but so well wrought, one would have thought a craftsman
had made them; they were more translucent than 30
pure gems. His brow has nothing menacing;
his gaze inspires no fear. He seems so calm.[9]

Agenor’s daughter stares at him in wonder:
he is so shapely, so unthreatening.
At first, however, though he is not fierce, 35
she is afraid to touch him. Then she nears,
draws closer, and her hand holds flowers out
to his white face. Delighted, as he waits—
a lover—for still other, greater joys,
he kisses her fair hands—no easy test 40
to check his eagerness, delay the rest.[10]
And now the great bull sports along the grass,
and now he stretches snow-white flanks along
the golden sands.[11] Her fear has disappeared,
and now he offers to the girl his chest, 45
that she might stroke him with her virgin hand;
and now his horns, that she might twine them round
with garlands.[12] At a certain point, Europa
dares to sit down upon his back: the girl
is not aware of what he is in truth. 50
And then, as casually as he can,
the god moves off, away from the dry sands;
with his feigned hooves, he probes the shallows, then
advances even farther; soon he bears
his prey[13] out to the waves, the open sea. 55

Europa now is terrified; she clasps
one hom with her right hand; meanwhile the left
rests on the hull’s great croup.[14] She turns to glance
back at the shore, so distant now. Her robes
are fluttering—they swell in the sea breeze.[15] 60