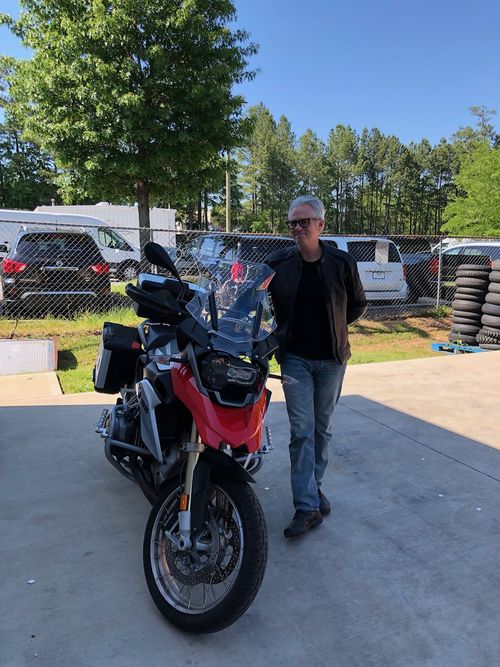 With my new GS. Photo by Giles.

What a beautiful day. The weather was almost perfect for a 200-mile ride: one way on a 2018 Triumph Scrambler, and one way on a 2016 BMW R 1200 GS. These bikes are night and day, zin and yang, old-skool and new. If I had any doubts, I am definitely a BMW guy when it comes to motorcycles. Not that I’ve tried them all or really even a handful, but in this particular circumstance, I’m very pleased with a significant upgrade.

It was pretty chilly this morning, so I layered rather heavily for the ride north. Giles was leading the way, and we took a route west of I-75 north to Marietta. My layers were successful, and I was comfortable the whole way. And I must say, for a last ride, it was probably one of my best on the Scrambler. It took a good three hours to go 100 miles. We made only one stop to feed the Scrambler’s diminutive gas tank, but otherwise went the whole way on what seemed like a pretty circuitous trek through the countryside and into the dense biomass of Atlanta. Traffic was fairly thick through the thirty miles or so, but we made it to Wooly’s around 1pm.

Wooly’s was a lot bigger than I was expecting, and there was a lot of activity of Cobb Parkway. People were gathering to see the Blue Angels fly over starting at the air force base across the street. (Yeah, thanks, Cheeto; that’s money well spent). I was not interested, so I met with Rick and Jenni to see my new bike.

The first thing that struck me was the size of the GS compared to the Scrambler. It was big. Big and beautiful. Yes, I had seen GSes before, but not in a while. Folks on YouTube talk about the bike’s size, but always say that it’s deceptive: the GS is much more nimble than it looks. I would soon experience this myself.

Paperwork was quick, and after Giles and I returned from lunch, the GS and its new Vario cases were installed and ready-to-ride. Rick went over the bike with me, touching on all the features of which there are many. If the Scrambler was an exercise in retro-minimalism, this GS is a cyberpunk’s ride with the looks to prove it. Here are a few things I now can enjoy: a fairing and adjustable windscreen; adjustable suspension and riding modes; the ability to actually carry some stuff in expandable cases; heated grips; LED lights and indicators (and a bad-ass front headlight); keyless ignition; cruise control. Oh, man, I could not wait to ride.

It’s true, the bike ride much lighter than it appears. It took me a minute to get used to the shifter which seemed awkwardly placed after having ridden the Scrambler for two years. The transmission, too, is still BMW-klunky, like my older R 1150 R’s. I noticed these right off. But I also soon discovered the hella-torque and wind protection of the GS. We were heading to Trader Joe’s in Midtown Atlanta, so I-75 was our best choice. While it might have been nice to get used to the bike for a few minutes, I quickly found myself comfortably going with the 80mph flow south. Some dude on a sportsbike even gave me and approving thumbs-up as he passed.

In the heavier Midtown traffic, the shifter still gave me issues. My foot was just not finding it on the first try. I discovered, too, the brakes on the GS are much more sensitive than the Scrambler’s. Indeed, the latter’s brakes had always felt a bit under-powered for me; the GS’s are excellent—just right. After a surreal, mask-wearing shopping experience at Trader Joe’s, we were soon heading south on GA-23.

Traffic was thick until we made it south of Atlanta. I was getting tired, as it had been a long day. When the traffic thinned, my foot started finding the shifter, and I discovered just how much torque this beast has—even in sixth gear. At some point, I passed Giles and took the lead for the rest of the day. After Jackson, about 40 miles north of Macon, the traffic disappeared, the road opened up, and I hot 70 and poked on the cruise control. Brilliant. I was awake and flying down this lovely tree-lined road in late afternoon. The sun flicked through the trees and the temperature was cooling. This was my favorite part of the day: I think I wore a grin the whole forty miles.

It was a long day, but brilliant. The first of many, I predict, on my new R 1200 GS. I’m already mentally planning my first trip.