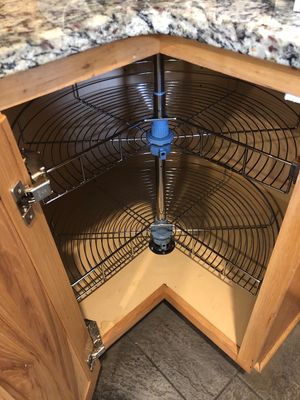 Do you ever get the urge to upgrade? I mean: just for the heck of it? There is little more satisfying than a home improvement—especially an easy one that brings much more practical satisfaction to daily life. I’m always a bit nervous about doing things like this myself, but I probably shouldn’t be. I’m a relatively smart dude: I can figure it out, right?

We moved into this house during the fall of 2017, and since then we’ve had this corner cabinet that Autumn, as is her wont, has piled with stuff. Originally, it had a broken, plastic lazy Susan in it which I promptly removed and ditched. However, without some sort of organizing component, a cover cabinet is very impractical. I had been meaning to replace the discarded lazy Susan, but always just figured it was something a professional needed to do. Since apparently we have no professionals in Macon, I decided to just try it myself. And you know what: I did it. It was a bit tricky, especially with the directions that read as if they were German translated to Chinese translated to English. But the parts fit together a certain logical way, and with a bit of effort and perspiration, we now have a much more practical corner cabinet. I’m a gatdam handyman. (Maybe not.)

It looks great. It’s sturdy. I cost $100. BAM! Highly recommended, and the install guy doesn’t curse too much. 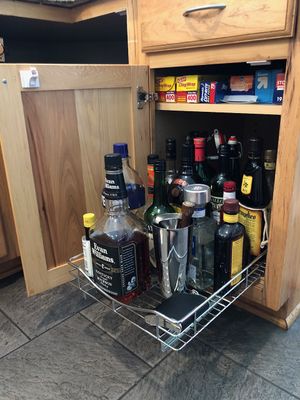 I also put in another slide-out drawer in the liquor cabinet. Again, having the bottles stacked five deep in this cabinet was inconvenient at best, and this slide-out baby helped immensely.

These are the first steps to making our small house a bit more smart. Neither of us really want to move again, so the best thing we can do is make the best use of the space we have. Much of that is about getting rid of stuff that just seems to collect—kipple is what Phillip K. Dick called it—and the other part is organizing what we do have in a smart way. We have a couple more ideas for the kitchen.

I continue to assist my WritDM students with their remediation projects. This project finishes up this week, so everyone should be editing their final articles.

Many of them are doing well; some just stalled out: they haven’t even attempted to do it. I’m really not sure why, though I did meet with a student yesterday who said she had just been “skimming” the syllabus and assignments, so she was way behind. I appreciate her honestly, but I fear that she will be unable to catch up.

This assignment, at least on the surface, is pretty straight-forward: just follow the directions. A couple of the longer articles are more challenging—mostly because of references and notes—but those I have been able to help with as the students worked. The only students I can’t help are those who never try. I even told another student this via Zoom: you have to do something before I can help. I showed him exactly how to get started, but it took him several more days to do something.

Could this be like my apprehension at doing my home upgrades? There is probably something analogous. But, like I did, they just need to get over it, pick up the drill, and get to work. If you’re afraid of messing something up, then move slowly, deliberately and stick to the plan.

I think many of them are just terrified of making a mistake. This is the tragedy of the current generation: they think mistakes are deadly, but they are integral to learning. I swear: the lessons I have learned the best in my life came from messing up. The greater the screw-up, the more profound and memorable the lesson. Does the shave something to do with the current emphasis on appearance? In a social-media world, appearance is everything. One must be competent and cool all the time. Is this it?

Well, if they found this project too much, wait until next week when we start editing on Wikipedia.