“I’ve always hated Zen.” That, predictably, is Norman Mailer shortly after meeting Lawrence Shainberg, author of the new memoir Four Men Shaking. Published in 2019 by Shambhala, the main narrative arc of the memoir takes place over a short time, recounting the final visit of Kyudo Nakagawa, a Zen master, to his SoHo zendō in New York. Though brief, Four Men Shaking, a series of tight vignettes, flows back and forth over the last fifty years detailing significant moments of Shainberg’s life and his attempts to reconcile his career as a writer with his pursuit of Zen. This contradiction establishes the fundamental conflict of the memoir and the relationships Shainberg develops mainly with his literary influences Samuel Beckett and Norman Mailer, and his Buddhist teacher, who Shainberg calls Roshi, or “old master.”

There's much in this memoir that will be of interest to readers of this journal, especially Shainberg’s accounts of his meetings with Beckett and Mailer. Shainberg links the former’s interest in “not-knowing, not-perceiving, the whole world of incompleteness” to his interest in Zen,[2] while Mailer’s influence is one of conflict and passion about the external world, his honesty, and his ability to bring a novelist’s sensibility to journalism. Half-serious, Mailer’s above assessment of Zen was both a reaction to Shainberg’s first memoir, Ambivalent Zen, and a friendly goading of the writer that begins their friendship—one that continues through Mailer’s waning years, mostly through shared meals at Michael Shay’s, thumb wrestling, and discussion/debates. 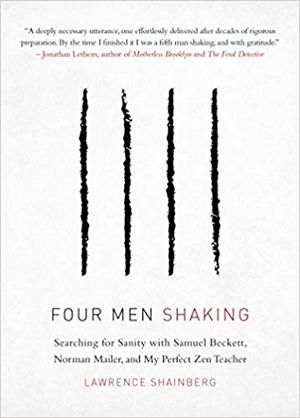 Shainberg’s succinct and eloquent accounts of the relationships he developed with these three personalities in the last years of their lives underscore Shainberg’s attempts to find sanity in his own life. His memoir reads like a puzzle he’s trying to assemble where some pieces might be too big, some are misshapen, and some maybe missing. Pieces like his friendship with Mailer and his zazen, or the Zen practice of “seated meditation,” seem antithetical to one another, like Shainberg is trying to assemble one puzzle from the pieces of several. This metaphor seems an appropriate one for describing his life specifically, and everyone’s generally. This seeming contradiction represents his interest in the “logical contradiction” of Zen and its goal, as articulated by Zen master Eihei Dogen, “To study Zen is to study the self. To study the self is to forget the self.”[3]

And here lies Shainberg’s dilemma: “How could I forget my self when I was obsessed with the brain that generated it?”[4] and elsewhere: “But essential nature [. . .] is formless, and the brain of course deals only in form.”[5] In these instances, he refers to his work as a writer, and his interest in neurology and the functioning of the brain. His early success as a writer stems from this latter interest. Brain Surgeon: An Intimate View of His World (1980) is a non-fiction portrait of a prima donna neurosurgeon who can do no wrong, even when he does. Godlike, Dr. James Brockman, or “the boss,” seems the epitome of the inflated ego that is as far from a Zen-self as one can be. In his novel Memories of Amnesia (1988), Shainberg’s protagonist, a talented neurosurgeon—perhaps a fictional Brockman, begins to suffer from brain damage which leads to his questioning reality and his own sense of self. It seems that Four Men Shaking is the logical descendant of this interest in the self vis-à-vis reality that finds its center in the author.

In this context, Shainberg’s friendship with Mailer does not seem too paradoxical. He discovered Mailer through The Armies of the Night wherein “Mailer had found his voice by letting go of himself, discovered his vision with total surrender to objective reality.”[6] While this last statement might be too generous, Shainberg borrows Mailer’s approach in Armies—“a perfect combination of of real-world description and novelistic skill”—for Brain Surgeon.[6] Mailer’s influence leads to the success of Shainberg’s book, and, as Beckett will tell him later, his strength as a writer in “witnessing.”[7] Indeed, while Four Men Shaking is about Shainberg’s self-discovery, its strength seems to be in Shainberg’s accounts of meeting with Mailer, Beckett, and his Roshi during the last years of their lives.

While not an explicit theme in Four Men Shaking, mortality for the four men weighs significantly on the narrative. Part of Shainberg’s interest in the brain is derived for its deviant pathology, or the brain damage that skews perceptions and therefore one’s relationship with the external world. Early in his account, Shainberg associates his interest in the workings of the brain with his writing and concludes that these lead to an obsession that reinforced a false sense of self: “That was the real brain damage—self-absorption and the fixations it engendered.”[4] Shainberg seems to link brain damage with a desire to impose a fictitious forms on reality, like his attempts as a novelist: “What is writing anyway but another form of brain damage?”[8] As a journalist, Shainberg is able to witness and break through the ego. Shainberg’s relationship with Beckett in his declining years illustrates this point, as the latter ruminates on his aging brain: “With diminished concentration, loss of memory, obscured intelligence—what you, I suspect, would call ‘brain damage’—the more chance there is for saying something closest to what one really is.”[9] Ultimately, the search for meaning and order is futile when that which is used to process it finally breaks down and dies.

Shainberg’s ultimate understanding does not seem quite as grim as my assessment might sound. It's a short book, light but dense. The memoir is not difficult to read, but it is challenging in its themes. It is difficult to encapsulate in a short book review, and it seems a disservice to try to do so.

My feelings having read this book and spent some time ruminating about it intersected with the death of a person who has had a huge impact on my own life: Neil Peart, drummer and lyricist for the Canadian rock band Rush. “The Professor,” a sobriquet Peart earned for his virtuosity, was 67 when he died of brain cancer—the cruelest way that I can imagine a person who might have been the rock music’s greatest drummer and lyricist to meet his end. His death hit me hard, even though I never met him, his works—to borrow one of his ideas—made up part of the soundtrack of my life. I have literally been listening to Rush my whole life and every significant experience of my life has been accompanied by a new Rush album or performance. Great music like literature helps those who experience it shape and order their experience of reality, even if it might not do so for the author. Ultimately, then, does art becomes a selfless act?

While Shainberg does not dwell on the deaths of Mailer, Beckett, and Roshi, much of the book is observing them in their declining years and trying to make sense out of mortality. I’m left with the question that seems to be an integral one for Shainberg: how can we derive meaning in the deaths of great men? Or, if all great men decline and succumb to death, how does that not render life ultimately meaningless? Especially for us little ones?

This final third of the memoir is the story of the last retreat, a seven-day sesshin, at the SoHo zendō. At 80, Roshi has decided to sell the zendō when he returns to Japan, so this will be the final sesshin Shainberg and twenty others will share with Roshi in New York. It’s during this ritual where these narratives come together, and Shainberg develops the metaphor for finding his “long-lost home.” Whether Shainberg is ultimately successful might be up for discussion—I won’t give away any more here—but he was successful in leaving me with a lot to contemplate about myself, my own influences, and ultimately what I will leave behind. As I said above: I do not want to give the impression that Shainberg’s memoir is depressing or maudlin, but it is honest and compelling. I left me with a sense finally of a resonant ambivalence, similar to my feelings upon finishing Herman Hesse’s Siddhartha, in my role as a fellow human on his own search for a long-lost home.