Dune and the Super Being
The issue with super beings is that they’re super, non-human. This is a problem.

Last week, my class and I read Frank Herbert’s Dune, something I haven’t done since high school. I remember being in awe of this novel: it was so big and rich — Herbert painted such a lush and complex picture of an epic future that I became an immediate fan. I was probably thirteen, and I tore through the rest of the novels, feeling sad that there were no more: Herbert died shortly after the publication of Chapterhouse: Dune in 1986. I did this a lot back then. What else was a nerdy little kid to do but to read expansive science fiction and fantasy cycles? 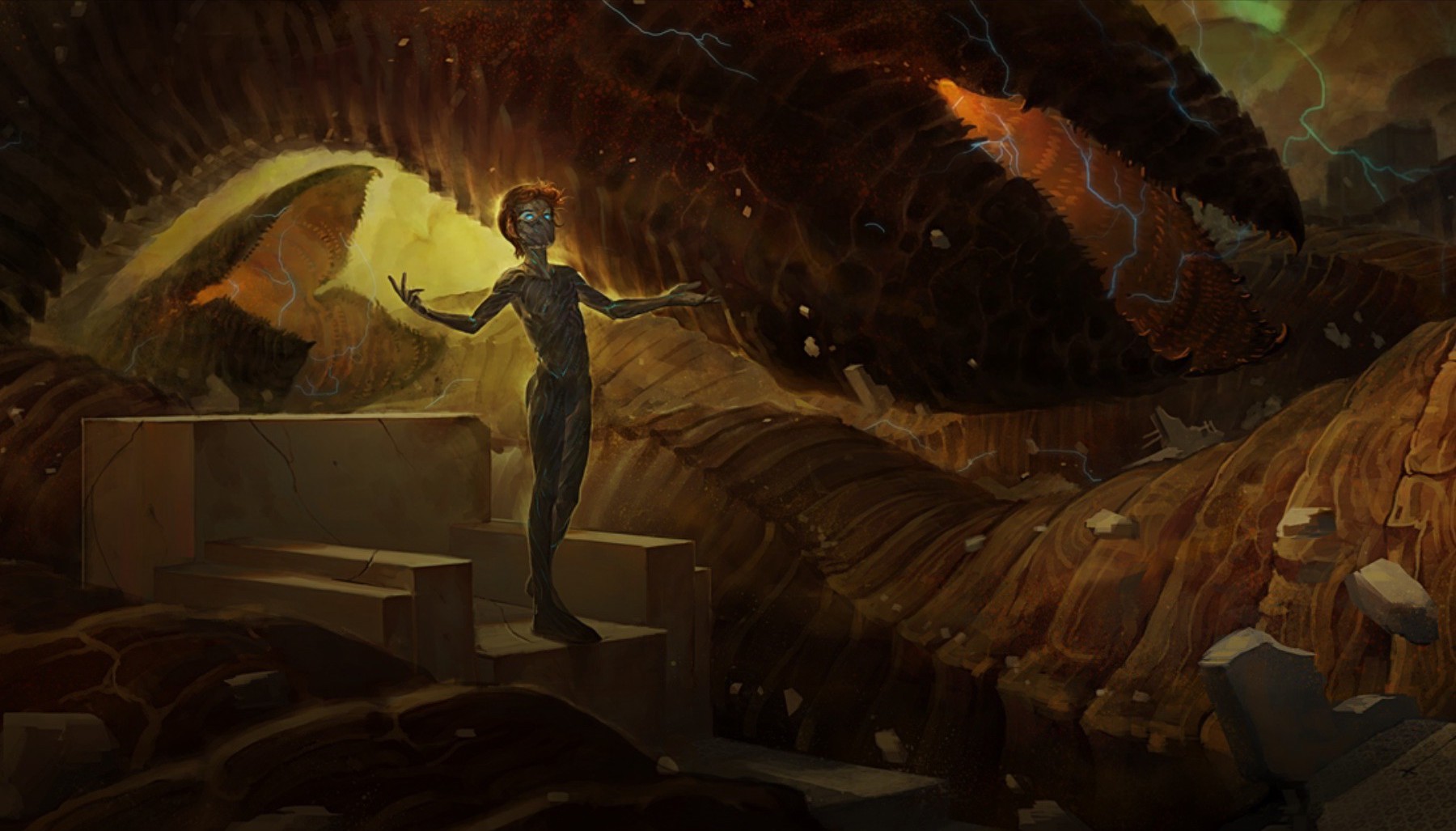 This time through Dune, I was still delighted at its complexity and nuance — particularly in its style, characters’ psychologies, and its examination of political power structures. (Oh, and there are the sf ideas, too.) I remember Herbert’s style as being unique when I read Dune the first time, and I still think so. He is one of the only writers to pull off a truly omniscient narrator. To me, his style is Homeric. Like Homer, Herbert’s most important character in the novel is the one he’s currently focusing on. His style discloses the huge gap between outward confidence and inward doubt. The reader is privy to all the characters’ thoughts, like we were reading Dostoyevsky’s Notes from Underground, but we see that all characters are the Underground Man. Herbert’s god-like style also speaks to his most poignant concern: human power dynamics and the environments that shape them.

Herbert’s tale, much like the ancient epics, have at their center a demigod. I’ve discussed this sort of science fiction’s relationship to the epic before, so I don’t have to rehash the particulars again. However, the similarities that struck with me this time included the narrative foundations of a social order. The role of the hero — always a quasi-divine figure — in epic poetry is one of scapegoat: they undergo the ordeals so their people don’t have to. This is always a double-edged sword, for any assertion of power means that certain traditions and expectations will be crushed in the process. In order to have progress, something must give way.

For example, in Gilgamesh, in order for civilization to be built and remain secure, and in order for Gilgamesh to have his name “stamped on bricks,” the old order must die. This happens to be the “evil” Humbaba. We see this same narrative repeat itself over and over in epic poetry: Achilles must kill Hector, the champion of the Trojan forces, and by so doing, conquer the Trojan way of life. Odysseus meets and vanquishes all types of “evil” so he can reassert his order in Ithaca. These struggles for power and dominance are the foundation of the epics, and often religion texts. The hero represents a single people’s vision that asserts itself on those it conquers, eliminating the society and their cultural traditions — or at least trying to.

In Dune, this is no exception. Paul Atreides is the culmination of Bene Gesserit eugenics: he is their Kwisatz Haderach, their male super-being. The novel is bracketed by this idea: the Reverend Mother Gaius Helen Mohiam goes to Caladan at the beginning to test the young Paul, thinking that he might be the one; the end of the novel has the older Paul Maud’Dib vanquishing his enemies and asserting a new order on the universe. Paul’s identity is split: he is both the Fremen revolutionary and the Duke of a Great House. These particulars join in an uneasy marriage in Paul Maud’dib, now the figurehead for the “creatures” he has created. Like Aeneas by the end of Virgil’s epic, Paul has become a messiah, a symbolic leader more powerful than the man ever was — a symbol grand enough to begin a new order, a new jihad.

I’m puzzled, however, about the genesis of the Bene Gesserit super being. One of the most fascinating and nuanced aspects of Dune is the Bene Gesserit order: they are an order of space nuns who educate, indoctrinate, and mythologize. They are the creators of the Missionaria Protectiva — a powerful missionary force that has seeded a particular religious mythology around the universe — allowing Jessica and Paul to more easily assume control within the Fremen culture. Herbert doesn’t dwell on this, but this sinister aspect of the Bene Gesserit shows that they are a sophisticated, manipulative force in the building and maintaining a particular cosmic order.

It’s the nature of this order that’s puzzling: it seems a traditional patriarchal one, put in place to support the male leaders of the great houses. Even the raison d’être of the Bene Gesserit is to create the ultimate male super being. Why? “Kwisatz Haderach” means “the shortening of the way” — the way to more male dominance over women? Yes, the Bene Gesserit are powerful, but they are always subservient. Weird.

So Jessica creates the Kwisatz Haderach in her son, Paul. Perhaps it’s not only nature, but also nurture that turns Paul into the super being. It’s only by staying on Arrakis for a prolonged period that allows Paul to develop his strange powers — powers that become so unpredictable that they even scare Jessica. It’s the spice mixed with Paul’s crafted genetics that allow him to reach his full potential. Perhaps gods are made only when forces converge precisely, when a place and time are right for a change that only a messiah can bring.

This might be the wisdom of the Bene Gesserit: they knew that even they could get complacent, stale, victims of tradition. Perhaps the ultimate goal of the hero is to occasionally destroy one reality so a new one can be built. This is Paul’s unnerving vision throughout the latter half of the novel: he ultimately sees jihad as an inevitable outcome of his victory. Paul’s choice to wear the mantle of the super being precipitates a violent disruption, but reluctantly and with a bittersweet outcome.