The Harbors of the Moon
The moon is a major symbol that haunts Rojack throughout Norman Mailer’s 1965 novel An American Dream.

At the 2007 Conference for the Norman Mailer Society, I gave a presentation called “The Harbors of the Moon: Media and the Mediated in Mailer’s An American Dream.” I have since lost that paper to the digital demons. Maybe for the better? I’m assuming it concerned the theme of mediation in Rojack’s life—his living somewhere between “the style and manufacture of oneself” and a genuine existence free of acting and pretense.[1] The entire first chapter of AAD waxes and wanes through the triumphs and defining events of Rojack’s public and private lives. While Rojack presents himself as an important, heroic man of action—notice, for example, the first paragraph of the novel where he is friends with JFK—I would argue that his crisis stems from defining himself as others would have him, not as he would desire to live for himself. 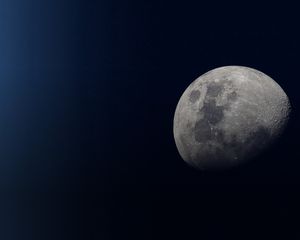 The moon is a major symbol that haunts Rojack throughout the novel. It seems to be linked with both madness and safety—or maybe the safety of madness. If, indeed, the urge for public success and celebrity status in America is for Mailer[a]—and I would cite almost the entirety of Advertisements for Myself as evidence—crazy, Rojack’s life reflects that—as do the lives of every other major character in the novel. Rojack comes to view his public life as “built on a void” and “finally a failure.”[2] His life is mediated by roles, via definitions, and through technology—much of it fostered by himself. Whatever safety—or harbor—this provides comes to a point of crisis on two balconies: one at a cocktail party and one that’s a scene of murder.

Ultimately, is the precipice between these two extremes that Rojack must learn to walk. He must find the courage at the moment of crisis to not give in to social pressures, and also not to lash out and destroy them either. Yet, at the beginning of the novel, Rojack realizes that his life is not his own, that it has been ruled by others around him, especially Deborah. His realization links Deborah with the cold certainty of the moon. After getting sick on the balcony at the cocktail party, Rojack goes to visit her; she is intentionally cruel, getting an admission of his love and replying:

His realization—brought on by the moon—is that his life is not his own. Perhaps it began on that hill in Europe during World War II when the moon seemed to take over, throwing Rojack’s grenades: “it threw them, and it did a near-perfect job”—or during the night of his double date with JFK when he “seduced” Deborah, “a girl who would have been bored by a diamond as big as the Ritz.”[4] He had become an actor without a center, playing roles he didn’t choose, and as a result became increasingly sick. He purges this sickness on two separate balconies: one in the form of vomit, the other his strangled wife. This action does not free him, however; perhaps the karmic mysticism that pervades the novel must take from him something he loves before he is free to begin again. Perhaps Cherry was doomed from the start? 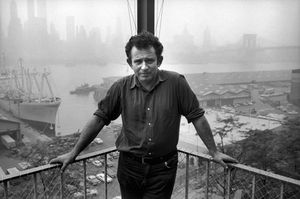 Mailer in 1965 — Photograph by Inge Morath/Magnum.

In fact, Rojack’s influence on all of the other main characters in the novel is poisonous. Deborah, Cherry, and Shago all meet their ends violently, and even the detective Roberts—after meeting Rojack—got drunk and beat his wife, “just why he did not know.”[5] After the climactic scene, Rojeck leaves a battered Kelly on the floor of his suite at the Waldorf. Rojack seems to take on the dimensions of a tragic hero whose downfall is felt by all those too near.

Rojack’s ledger seems to be balanced by the novel’s end. In Vegas, he travels between the ersatz cool of air-conditioned hotel rooms and casinos and the heat of the dessert. The technology that produces these artificial atmospheres weighs on Rojeck, driving him south: “I was something like sane again, and packed the car, and started on the long trip to Guatemala and Yucatán.”[6] Perhaps America has become too much like the air-conditioned Vegas for Rojack, a place that must be left behind in order for him to be reborn.