New media are defined in at least two ways: 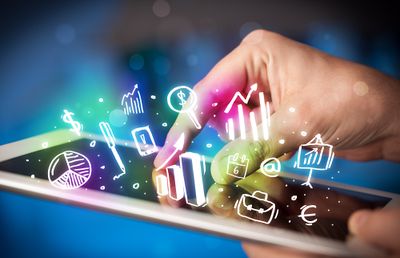 When we discuss new media, we are talking about networked digital technologies, like computers and mobiles devices: anything that has a digital component that can communicate in some way with another digital device. New media is often contrasted with the media industries of the 20th-century: film, television, and radio. These “old media” sell products that are easily controlled under a centralized authority of production and law. In other words, they sell atoms: physical containers that have material value and are difficult to copy or change, like a book, video tape, record, or television.[3] Using these media, the audience become consumers who purchase products and agree to use them in certain ways. This system benefited the media industries and supported a professional culture of producers, while promoting passivity, isolation, and unresponsiveness in the consumer.[4]

In contrast, new media decentralize media control and production. They promote an amateur culture of remix[5] that shares the power of production with the consumer. No longer are the products of professional culture married to their physical containers; the new media are bits: free of atoms that seek to control their dissemination. The power of centralized authorities that benefited from the old media culture are called into question by the ubiquity of networked digital gadgets that promote action, community sharing, and individual creativity. The implications of this switch on economic and political systems are far-reaching and still in question.

The new media are characterized by convergence: that is their ability to bring together what used to be separate and distinct media forms, like prose and video, photography and music.[6] Sometimes called “multimedia,” new media are the gadgets that bring bits together in user-configurable ways. Media which was once separate and compartmentalized can now be combined into new forms; this is the practice and potential of new media. It allows users the freedom to play and explore and could one day offer an immersive experience as meaningful as a Shakespeare tragedy. Often the sheer magnitude of choice that new media offers causes what Murray calls a “pullulating moment”: “when we become aware of all the possible choices we might make, all the ways in which we might intersect one another for good or evil” often in ways that cause a paralysis of uncertainty and vertigo.[7] In other words, pullulation is a “splitting reality.”[8]

Another consequence of convergence is that the consumers have more influence on producing the culture they have a passionate connection with. Thanks to new media, communities of fans may now speak with a collective voice to resurrect cancelled television shows, to crowd-fund major motion pictures, and to communicate with artistic professionals. This democratizing power of new media has also helped to topple governments.[9]

New media is not all positive, however. In her 1987 essay “A Cyborg Manifesto,” Donna Haraway warns of the “informatics of domination,” or those forces who would use new media to (re)establish an even greater control of our psychic and daily lives.[10] For example, the former Cambridge Analytica illegally collected Facebook data to collect 5000 data points on every American voter, having an unprecedented influence on the 20216 election.[11] This incident has shown that with the ubiquity of new media, perhaps we are even more susceptible to manipulation triggered by our more primal fears and desires, and therefore much more easily controlled.

Part of the reality of new media is that it’s just that: new. Its power and implications often remain unclear to those of us who adopt them until they change us, for better or worse. Just in the last two decades, the new media have had profound implications on the production of culture, the nature of politics, and basic human connection.

Retrieved from "https://grlucas.net/index.php?title=New_Media&oldid=12295"
Categories:
This page was last edited on 28 August 2020, at 14:46.
Privacy policy
About Gerald R. Lucas
Disclaimers