A Question of Life
Bruce Sterling’s Schismatrix through the lens of cyberpunk.

It’s been about twenty years since I first read Bruce Sterling’s Schismatrix. At the time, I didn’t find it that interesting, nor a particularly good novel. Sure, it had some cool science-fictional details, but overall I guess I just wasn’t sure what I was reading. Was it science fiction? A political polemic? A metaphysical treatise? A bunch of related short stories? A contemporary epic? Its expansive setting—place and time—gives Schismatrix less the feel of Neuromancer and more of Dune. What was Sterling doing? 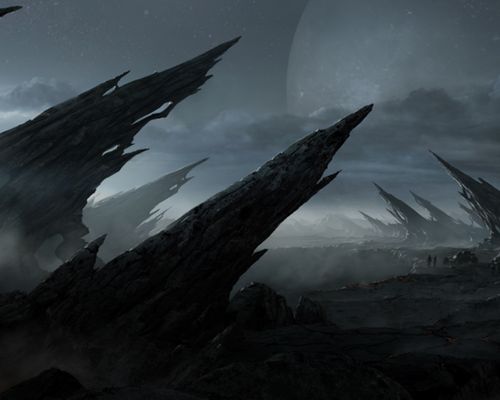 I had a different feeling this time. Indeed, the whole premise of the novel is cyberpunk: how advanced technology will affect the body and soul of humanity. Who owns “the future”? It’s less about how we define “human” and more about how we define life. Schismatrix even suggests that “human” is an anachronism—something left behind on the planet that created it. Humans invented technology in order to deliberately change the “human”—even discard it.

The schismatrix, then, is the inevitable struggle that emerges when deciding just how to become posthuman. In Sterling’s novel, this battle is between the Shapers and the Mechanists. Both factions in this split have their foundations in technology, yet the contention seems to be in how technology should be employed to reshape what has always been the center of the “human”: the physical body. Shapers use the technologies to remake the body through the realm of Freud: psychology. The Mechanists change the body through the machine, literally incorporating the machine into the body. The Shapers change the body by bringing the inside out, while the Mechanists bring the outside in. Yet, like all philosophical schisms, this one seems rather arbitrary as the novel progresses, as both factions borrow the convenient technologies of the other as needed. Sterling’s Shaper protagonist is the primary example: he begins the novel as a Shaper, but eventually picks up his share of Mechanist modifications.

As Lindsay grows old (the first half or so of the novel, he is a young man, but time accelerates in the second half, adding about 150 years, total), the Shaper/Mechanist distinction becomes less important for him. In fact, it could be argued that he eventually eschews these labels in order to embrace life’s greater possibilities. Indeed, he reencounters two characters from early in the novel: the Mechanist Ryumin and the Shaper Kitsune. When he first meets them, they are each already radical representatives of their group: Ryumin is an aged human who only continues to function through the aid of his implants. Kitsune is the head of the Geisha Bank, and is herself the physical product of human sexual desire. Neither, Lindsay observes, could really be described as human. 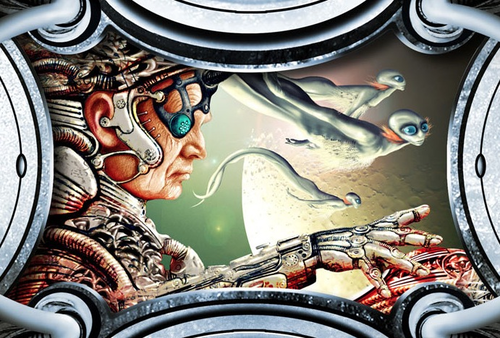 However, later in the novel, both have changed even more radically. Ryumin is full-fledged “wirehead,” no longer technically living; he explains: “there’s a whole world behind this screen. The lines have blurred so much that mere matters of life and death have to take a back seat. There are those among us whose brains broke down years ago: they totter along on investments and programmed routines.”[1] Similarly, Kitsune has become the “Wallmother”—the fleshy deity of her “Wallchildren.” She is literally their world, her flesh expanded and modified: “the Wallmother four-hundred thousand, eight-hundred and twelve tons” in which her people live.[2] These examples of posthumanity are interesting to Lindsay, but neither provide a model for his life.

It seems that one of the dominant themes in the novel is the question of life. From the outset, Lindsay has always been on the side of life, and wherever that might take him. He is a sundog at heart, and goes where opportunity and his best chance at living seem evident. He is not one for nostalgia, but of progress. He learns that life means change—and particularly long lives mean even more radical change. Even here, Lindsay is the opposite of his nemesis Constantine. The latter seeks to recapture the past by conquering the future. The best example is his cloned progeny, and the fact that he tries to use genetics to resurrect the dead. By being unable to let go of Vera Kelland, Constantine becomes a destructive force in the novel. His nostalgia makes him cruel, vindictive, and tyrannical. However, Constantine’s acts of opposition ironically make possible Lindsay’s growth. For example, when he annexes Goldreich-Tremaine, he forces Lindsay to flee, even though his wife Nora Mavrides stays behind. Lindsay vows to return, but before he can, Constantine forces Nora to take her own life. Lindsay must move forward; he cannot return.

This, too, might be a collary to the choose-life theme: return is not possible. Or perhaps, attempts to return to what we had rob us of life. This is Constantine’s quest throughout the novel. Even at the end, he wants to return to the place where Vera Kelland took her life to end his. That place was where the novel began, but Lindsay cannot go with him.

Another example is Earth itself. The planet has become a place where humanity has been left behind: a neutral zone in the schismatrix. Here’s where the humans decided to stay human; it’s a place of “paranoid isolation” and “fanaticism”: “a world gone stale.”[3] Earth’s reality is unchange, like a neo-dark age: for, as Lindsay knows, “denying change meant denying life.”[4]

Finally, true change also means death. Technology has always been the human attempt to delay this inevitability, and a theme we see regularly in cyberpunk. Part of the mythology of the “human” has been the dichotomy between the body and the soul—a metaphysical narrative of transcendance and eternal live associated with the latter. While technology can prolong the physical body in numerous ways, it cannot prolong life. Schismatrix’s final message seems to be that technology can only take us so far. While we seem to be on the track to posthumanity, that fact will not solve the larger concern of living. Sterling’s solution is unique, but I won’t give away that ending.

It seems that my experience with Schismatrix has proven my thesis: I’m a different person this time around, so Schismatrix is a different novel—one I’m glad I gave another chance.