I love to drive. There’s little as satisfying than being behind the wheel of high performance automobile in the countryside: downshifting into a corner, manually punching through the gears, and pushing myself and the vehicle to our respective limits. There’s something Zen about driving — connecting with the road and the surrounding countryside, nothing but tarmac, technology, and the undiscovered around the next sweeping curve. And don’t even get me started about motorcycling.

{{cquote|As time went on, we learned about the drawbacks of car culture. . . . We discovered gridlock, smog, and the frustrations of trying to walk in a landscape not designed for people. When everyone has a car, it means you can’t get anywhere without one. Instead of freeing you, the car becomes a cage.|author=Maciej Cegłowski[1]

I also hate to drive. There’s little as frustrating as city traffic: stopping at ill-timed red lights, getting cut off by the douchebag in his Camaro, creeping along because of endless roadwork, being followed too closely by the woman in the SUV more interested in her cell phone conversation than driving. There’s something just wrong about how the automobile has become a compulsory part of our daily lives — the commute to the job that always seems to be too far from the house, the ever-increasing cost of gas, and the mind-numbing mundanity of the road too frequently traveled.

When I first learned how to ride a motorcycle, I ran in to this weathered and leathered biker who told me to think of every ride as special. This is the only attitude to have when riding: think only about the ride — what you’re doing right now, body one with the machine, road in front of you, and the potential around every curve. If the ride is special, you’re alive in the moment to ride and nothing else. I’m convinced that the extra attention that this attitude requires has saved my life a few times, mostly from drivers who’d rather be doing anything else than driving. 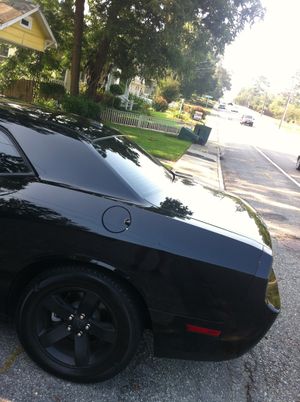 Yeah, dude, just park your car right on the sidewalk. I’ll walk around it on this busy street.

We’ve developed a carcentric attitude toward life, and so our everyday lives have been infected by the necessity of the car, whether we intended it or not. Evidence of this carcentrism only becomes apparent when we try to get around without our cars. We have created hazardous environments for anyone not “driving,” and it needs to be remedied.

When I first started cycling in earnest a couple of years ago, I was chatting with this dude about how unsafe central Georgia’s roads are for cyclists — mostly because people drove like they didn’t see me or they just didn’t care. He laughed and said, “You’re stupid if you ride on the roads in anything but a car.”

I remember saying something about the laws that say pedestrians always have the right-of-way and that cyclists have just as much right to use the roads as cars do. He responded, “Yeah, the laws might say that, but you’re still stupid if you expect these rednecks to give a crap about cyclists. It’s better to just accept that and stay off the roads.” While I disagreed with his conclusions, I couldn’t argue with his point: most drivers either didn’t care about anyone not in another car, or they were just too distracted by not-driving when “driving.” The conclusion: not being in a car meant not being seen.

Carcentrism has been shaping our contemporary world for about a century, and conventional wisdom suggests that it’s easier just to accept it than to try to change what has become the dominant attitude. I can’t accept this. Like the waves of women who stood up for gender equality, the activists that marched for civil rights in the sixties, the LBG community who shouted “we’re here and we’re queer,” and all the other socially oppressed groups who said “we’re not gonna take it anymore,” I have to stand up for pedestrians, cyclists, skateboarders, and all those others who choose not to get in their cars against the oppression of carcentrism. It’s time we take our streets back.

Yeah, just put your old discarded TV anywhere on the sidewalk, preferably where it only inconveniences pedestrians and not cars.

Carcentrism is easy to spot. It’s what leads to people throwing bags full of empty Krystal boxes on the side of the road; putting garbage cans right in the middle of sidewalks;[2] stacking the remnants of weekend yardwork all over the sidewalk and halfway into the street;[3] parking their cars on sidewalks; giving no way to cyclists or runners; giving no way and laying on the horn when passing runners; giving no way, laying on the horn, and speeding up when passing runners. The list is long and mean.

And it’s not just the practices of citizens, but the lack of public- and private-sector concern for the situation. Streets are paved with no sidewalks and no shoulders; parks are few or non-existent; public spaces are overrun with motorized vehicles; malls and shopping centers are built that actually encourage driving through the middle of them (yes, it was too much effort to park and walk into the mall); apartment complexes are built with electronic gates that only respond to heavy vehicles, effectively imprisoning anyone not in a car; cities are being built out, rather than up, letting the urban centers fall into disrepair, forcing citizens to drive to ever-expanding outskirts, and producing more sprawl and derelict buildings. The list is long and sad.

These realities not only make us carcentric, but promote isolation, misanthropy, and unhealthiness.

If you’re one that only leaves your house for two reasons — one to do some sort of never-ending yard work, or to get in the car and drive somewhere — then likely you might not even consider how putting a garbage can on the sidewalk is convenient for no one but yourself. I think the best way to begin curbing carcentrism is to just have a walk around your own neighborhood and see how difficult and dangerous it is. This may not be true everywhere, but it certainly is where I live in Macon, Georgia. And I’m even supposed to live in an “historic district” — you know, a nice area.

Leaving your neighborhood on foot or bike is also educational. It seems to me that at least one-in-five drivers has a cell phone on his face. It’s easy to see from these animated conversations that they should be in a coffee shop, not behind the wheel of a large truck. I don’t need a study to tell me this is dangerous — not just to other drivers, but even more so to those of us not protected by an automobile. Not only are drivers distracted, but they seem even more aggressive from the sidewalk, especially when they speed past. Now I don’t want to sound like my mother here, but why is everyone in such a hurry? Do you really need to drive so quickly? Please slow down and consider cyclists and pedestrians. Take a breath. There. 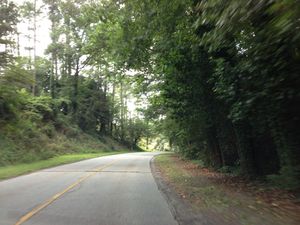 Ingleside Avenue: where my runs come to an end. Notice there’s plenty of room on each side to have a sidewalk. Yet, I’m forced to run in the mud and grass if I don’t want to be hit by people driving much too fast.

I run at least twenty miles a week, so I cover a lot of ground on foot. It’s dangerous, but I see more and more of my neighbors joining me. I think that even more would if we as a community decided we wanted to make some changes to our streets and neighborhoods. We should set aside more land for parks, so we can have outdoor areas away from traffic. We could make certain streets only accessible to residents from side roads, cutting down on drivers cutting through to avoid traffic lights. We should require sidewalks, bike lanes, and wide shoulders whenever new streets are built or existing ones upgraded. Streets that are narrow — like my local Ingleside Avenue pictured just above this section — could get speed humps to slow traffic way down.

We might let residents know that sidewalks are only for that: walking — not parking or dumping. We could close off sections of downtown to cars, encouraging more pedestrian traffic and local businesses to reinvest in town centers. We could take some old train tracks and convert them to cycling trails. The list goes on. I do love to drive, and there’s something healthy about a peaceful drive in the country. However, by combatting carcentrism, we could all benefit by replacing a bit of compulsory car time in areas of our communities set aside for non-car activities. It would promote physical and mental health, pride in our city, and cleaner air for us all to breathe. I would equally love to ride my bike to work, but this dream can only happen if we cared about it as a community. I’m not stupid for wanting a friendlier and safer community, am I?

I’d love to go back to a time when driving was special because we didn’t have to do it daily. What about you?[4]