A Clash of Kings: Some Thoughts 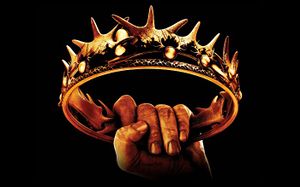 When kings clash, the small people are the ones who get hurt. The second installment of George R.R. Martin’s “A Song of Ice and Fire” series, A Clash of Kings, progresses the various plot lines, but also increases the uncertainty for the various characters. A mysterious comet in the east oversees all of the action; there’s more movement from the wildlings beyond the wall; several new characters are introduced, Theon Greyjoy becomes a point-of-view character, as does the new figure Davos Seaworth, the “Onion Knight” of Stannis Baratheon. Like A Game of Thrones, Clash begins with the supernatural seemingly taking an interest in affairs of humans.

Clash has excellent character development—particularly the chapters surrounding Daenerys and Tyrion—and that’s the pleasure and curse of reading Martin’s work. Tyrion succeeds Eddard as the major figure of this novel—he has fifteen chapters, five more than Arya’s ten—so judging by what happened to Ned in Game, Tyrion might be in for a fall. Women characters are still the underdogs, but each become stronger and further developed in this book. Whereas Game suggested trouble was ahead, Clash propels us into it, like a battering ram against a castle gate.

I’ll explicitly state right here: there are likely spoilers ahead, so be warned if you continue reading.

What does it mean?

The prologue is told from Maester Cressen’s pov as he attempts to figure out the significance of a new comet in the eastern sky. Not only is this omen troubling, but so is the atmosphere of Stannis Baratheon’s court on Dragonstone. It seems this witch from the east has wormed her way into Stannis’ good graces, and she now has poisoned his mind. I’m reminded of Gríma Wormtongue from Tolkien: Melisandre’s hold on Stannis portends trouble, so Cressen attempts to eliminate her. What’s interesting here is that she survives the attempt on her life, proving that she wields real power. With the comet, perhaps magic has returned to Westeros.

This uncertainty about Melisandre is picked up by Davos. While the Onion Knight is loyal to Stannis, he bears witness to her dark powers. She takes life from Stannis in order to birth a shadow to kill Renly and then Ser Cortnay Penrose, master of Storm’s End. We become privy to her powers through the eyes of Davos who becomes convinced of her evil and eventually comes to same conclusion that Cressen did. Significant is the fact that Davos is low-born. His perspective is more down-to-earth than others’, so Stannis needs his counsel, but doesn’t always appreciate it. Davos is honest and forthright, picking up these traits from the missing Eddard Stark. However, unlike Eddard, Davos seems a bit more cunning when he needs to be. Davos only has three chapters in to Clash, but I predict his role in the series will become greater. 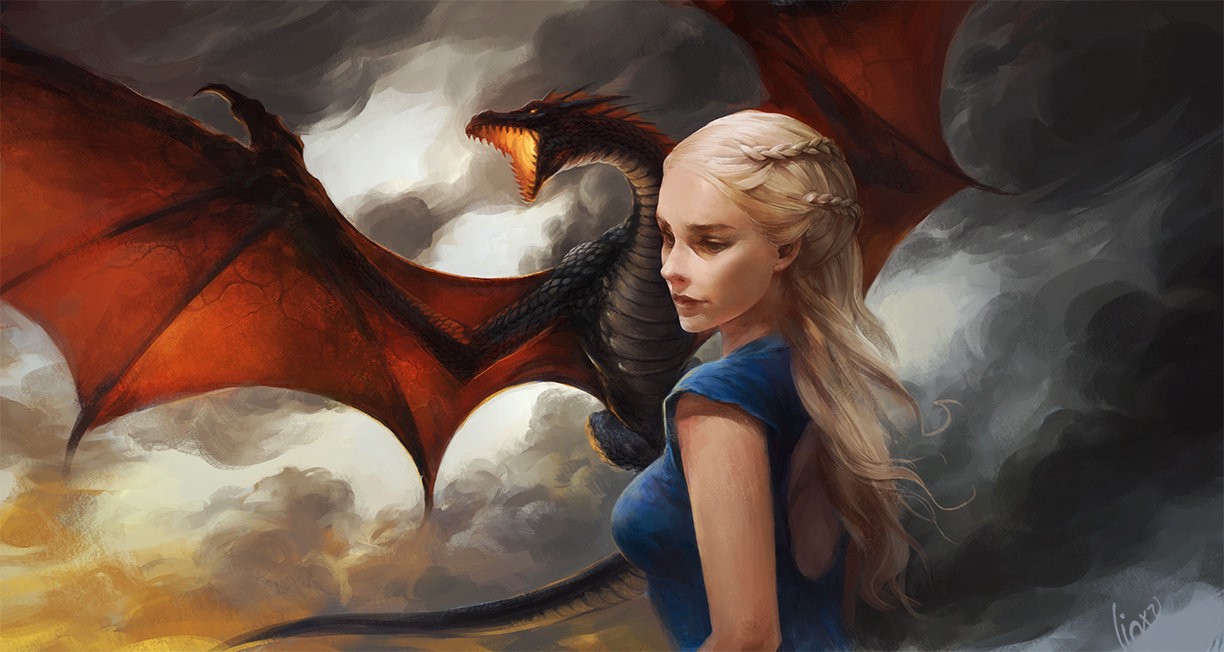 Another appearance of magic comes in the Daenerys chapters. She and what’s left of her Dothraki clan make for Qarth over The Red Waste. She’s still trying to build an army to retake the throne of The Seven Kingdoms. There, Dany encounters the Undying of Qarth, or coven of warlocks—another connection to zombies? They try to seduce her with their illusions, likely attempting (like everyone else she meets) to steal her dragons. This trial, reminiscent perhaps of a Greek hero, she passes, and destroys their temple.

This is only one of Dany’s trials in Clash. She is on a spiritual journey as well as a her worldly quest. Her rebirth occurs by fire at the end of Game, where she returned accompanied by dragons. Perhaps the comet, like a Star of Bethlehem, foretells of her rebirth, a potential savior for Westeros. Maybe with the new dragons, magic itself has been renewed in the world, or it ushers in a new age of gods.

As Dany grows more powerful and competent, Tyrion, too, seems to have a run of luck. As the interim Hand of the King, he sets about putting King’s Landing in order—his order, or so he thinks. Tyrion believes himself a Machiavellian, but he lacks something that Cersei and Tywin have over him—something that we just might call evil. 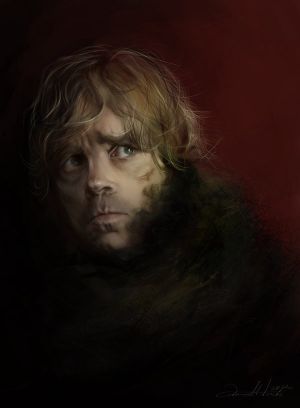 Early in the novel, Varys tries to warn him of this when the two are talking about power. The latter states: “Power resides where men believe it resides. No more and no less. [. . .] A shadow on the wall [. . .] yet shadows can kill.” This seems to be foreshadowing to the literal assassinations of Renly and Ser Penrose, but also a warning to Tyrion about his place in King’s Landing. Through his relationship with Shea, Tyrion shows a compassion for others that his sister and father don’t share. They are more interested in the game. Tyrion plays the game well, but he turns out not to be as adept as other Lannisters.

Tyrion’s downfall at the end of the novel reminds us of Cersei’s warning to Eddard in Game: “When you play the game of thrones, you win or you die. There is no middle ground.” Ned discovered the truth of this statement, and Tyrion might have met the same fate if he wasn’t saved by his squire. Perhaps his death is symbolic; there might be a rebirth in order in A Storm of Swords.

Sansa is still annoying, and it seems that her character is more about reflecting the characters of Cersei and Joffrey than about her. She is an innocent victim in their games, still being held as collateral for Jamie, and she really doesn’t do much else than get battered around. However, she is beginning to learn that “Love is a poison.” While she’s not ready to totally disbelieve all the romantic tales of valor she grew up with (“There are gods, she told herself, and there are true knights too. All the stories can’t be lies.”), she is no longer cloistered from the evils of the world. She sees the ugliness of reality first-hand in Riot of King’s Landing. She is saved from the mob by the Hound, otherwise her fate would have likely been the same as Lollys Stokeworth’s. She, too, endures the siege of King’s Landing with Cersei, realizing that the Queen means to have Ilyn Payne kill them all if the battle turns in Stannis’ favor. Why do I feel like Stansa’s in for more trials in the next novel?

Speaking of the Hound: he seems drawn to Sansa, yet understands that she only feels revulsion toward him. The Hound is an interesting character, one that seems to be engaged in an inner struggle: he doesn’t want to be like his brother Gregor, but he also thinks he has no place in high society. He lives on the edge of society, performing the unsavory duties Joffrey throws his way, like meaty scraps a master might throw to his dog. His last scene in King’s Landing before he flees is with Sansa. He seems to want to save her from Joffrey, yet he can’t bring himself to actually offer—as if his own self-loathing won’t let him do anything noble. Perhaps his freedom from Joffery will allow him to grow.

Theon Greyjoy is a punk. He, like Jon Snow, has father issues. This is not good for anyone, especially the citizens of Winterfell. He has something to prove, and others suffer for his arrogance. However, he disappears by the end of the novel, a seeming victim of the Bastard of Bolton—another one with father issues.

Jon Snow uses his sword, hangs out with his wolf, and does Night’s Watch things. He has to kill Qhorin Halfhand, symbolically killing his father (is that a stretch?). He meets a girl and another potential father figure in Mance Rayder. His loyalties are tested, but he has his father’s fortitude. Important things lie ahead for Jon Snow. 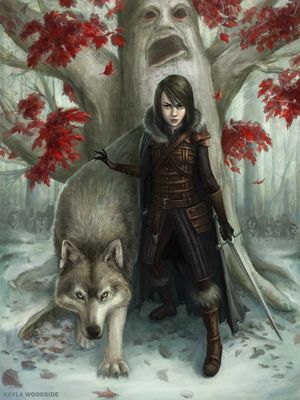 Arya is still lost. How much more can she endure? We see utter inhumanity of Gregor Clegane through her eyes, and she meets a potential replacement for Syrio Forel in Jaqen H’ghar. The undeveloped narrative of Gendry—Robert Baratheon’s bastard—is in her chapters; something must come of him, no? It seems that Arya is learning how to be a wolf, her way of surviving in the harsh world. Cunningly, she rarely uses her real name, instead adopting names that allow her to fit, chameleon-like, into her situation. Yet, while she wants to remain hidden, like a mouse in the wall, it seems she must take matters into her own hands. She emerges from the shadows to kill a guard to escape Harrenhal. Arya’s quest is one of identity.

Whom have I forgotten? Bran Stark. He’s still crippled, but learns he is a warg, so he prefers to spend time as his direwolf Summer. He befriends Meera and Jojen Reed, who protect and guide him. Jojen becomes a spiritual guide for Bran, encouraging him to seek the three-eyed crow. Bran’s power will likely be found north of the wall.

Catelyn Stark. Perhaps I don’t give her enough credit as a character. She seems to be around just to let us know what Robb’s doing. Yet while one might dismiss her—like some of the other characters do—as a mother/widow lost in an emotional turmoil, she is more than that. Through her, Brienne of Tarth—another uncommon woman figure—is introduced, and she brings Brienne and Jamie together, which will likely have some significance in Storm. It seems that Catelyn grows increasingly disconnected from the other characters: she is always letting go. Is this a mother’s job in times of war? She sees Renly killed; she watches her father dying and ostensibly losing his mind; she believes her two youngest are dead—killed by the traitor Theon Greyjoy; sees Robb becoming a man and a king, necessitating a greater distance be kept between them. It seems she can’t stand the thought of any more death and distance, so she releases Jamie, perhaps with the irrational hope that her daughters will at least be returned to her. Is this naive, desperate, or strategic? Perhaps all three.

A Clash of Kings ends with little resolved, yet pointing toward the epic third novel. As I stated elsewhere, Martin seems to favor the underdogs, and while they don’t necessarily come out ahead at the end of Clash, they have all grown as characters. Knowing Martin’s penchant for brutality and despair, they will all still have trials before them, and likely they all won’t survive, but Clash is a great read and the kind of dark fantasy that reflects today’s zeitgeist well.