The Case for Gibson
Case acts as a lens through which to view the other characters in Gibson’s Neuromancer.

Perhaps I’m too hard on Case. Maybe Gibson’s protagonist is like the mysterious stranger of American Westerns: one of ambiguous morality who travels the frontier, helping the settlers when there’s something in it for him, then moving on. Who was that geeky console cowboy? 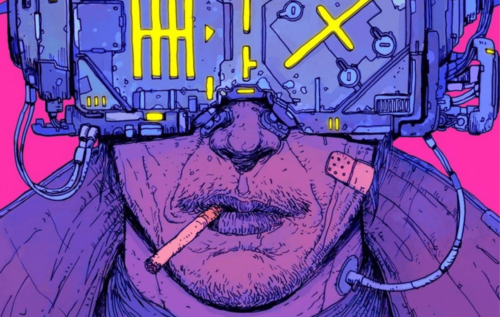 Yet, Case is alone at the end of the novel, back to his old tricks, gliding through headspace like the Lone Ranger over the plain. Perhaps in this new frontier, the console cowboys are supposed to be loners, that having set his world right — getting his abilities healed and helping Wintermute/Neuromancer transcend — he can resume his previous life. Though the end is bittersweet: the final glimpse of Neuromancer, Linda, and himself just out of reach, and a reference to Molly, very present in the finality of her absence: “He never saw Molly again.”[1] Yet, he is healed; he does have work, and “a girl who called herself Michael.”[2] Things could be worse.

I guess what bugs me is that Case doesn’t seem to grow as a protagonist. However, if he’s just a rearticulated Western icon, maybe he’s not supposed to. If Case, like Molly, is wired a certain way, he will always return to a default state. This is how myths work. Yet his default state seems to be caught between the headspace which he longs to occupy, and the meatspace in which he laments being trapped.

In an interview, Gibson stated: “On the most basic level, computers in my books are simply a metaphor for human memory: I’m interested in the hows and whys of memory, the ways it defines who and what we are, in how easily memory is subject to revision.” This does illuminate Case’s vision at the end of the novel. Part of memory is always nostalgic, and much of nostalgia is stained with the patina of regret. Nostalgia attempts to resurrect the dead: Neuromancer, Linda, and the Case that was with her are all dead. However, the computer, unlike human memory, is not subject to analog degradation, so perhaps computer memory is less nostalgic and more hopeful. Maybe as long as the pattern endures, death may be postponed?[3] Perhaps in Case’s world, to visit this place again, one would need only enter their equivalent of a URL. Headspace can be tricky.

Another keyword in the Gibson quotation is “revision.” In the matrix, this might be a good description of what Case does: he revises code, hacks systems, alters patterns. This is what he does — part of how he’s wired, and he’s good at it — an artiste. He changes systems to make them more amenable to him and his desires.

Likewise, Molly is the muscle, so she revises her meatspace to make it more conducive to her function. Yet, her upgrades eyes and nails can’t help her wipe the memory of her failure with Johnny. She, arguably, is now like a machine: on autopilot, going from job to job, careful not to let feelings get in the way. She even uses a metaphor for a machine to excuse her actions, but when she initially meets Case and when she leaves him: “I guess it’s just the way I’m wired.”[4] Molly’s memories, like our own, shaped her and in a way determine her actions. She, like Case, seems to be more machine-like than human.

In contrast, it’s the computer that seems most human: Wintermute directs the actions of the novel desiring freedom, even though its freedom remains an unknown variable. Likely, as it tells Case, it will mean that its current program will cease to be, merging with its twin to become something else. Yet, it longs to transcend its code, not satisfied with the way it’s wired.

It seems that a basic trait of humanity has been its desire to transcend its limits. The drive to explore, push the boundaries, to evolve beyond our basic program has created wonders, especially technical ones. Technology allows us to extend our reach beyond the physical, but as Marshall McLuhan argues, when we do this, we numb something for which our technology acts as surrogate. Plato argued that writing would destroy memory. It didn’t destroy it, but it did change it for good: allowing humans to record their thoughts on something more permanent than neurons.

Books have stood as symbol for Western knowledge for centuries. Books are our collective memories, written for us by our best thinkers and artistes. We store them as physical objects on shelves for easy access when we want to learn something new, escape our quotidian lives, or relive the tragedy of the Prince of Denmark.

The Case’s world, books are alien artifacts, replaced by the matrix. Case extends himself through his computer, where memories become digital, implying that they could either last forever (ROM) or they could be easily changed or deleted (RAM). It seems that these characters fight for some permanence in their lives, perhaps desiring the simplicity of codes that can be accessed, but not (easily) changed. Their extensions into the malleable world on the matrix deadens them to traditional human desires and drives, ultimately making them part of the machine.

Wintermute/Neuromancer have transcended at the novel’s end, but it doesn’t seem to matter to Case or the rest of humanity. After a brief visit with Case, the new entity leaves abruptly to find and be with its own kind. Case throws his shuriken into the now empty monitor — a silver star he has carried throughout the novel, given to him by Molly, and stood for him as a symbol of hope — saying: “I don’t need you.”[2] Whereas W/N goes to find others, Case is left alone. Who doesn’t he need? Linda? Molly? W/M? The star? The final words of the novel suggest the longing to connect, but its impossibility: “He never saw Molly again.”[5]

Blame it on how he is wired.