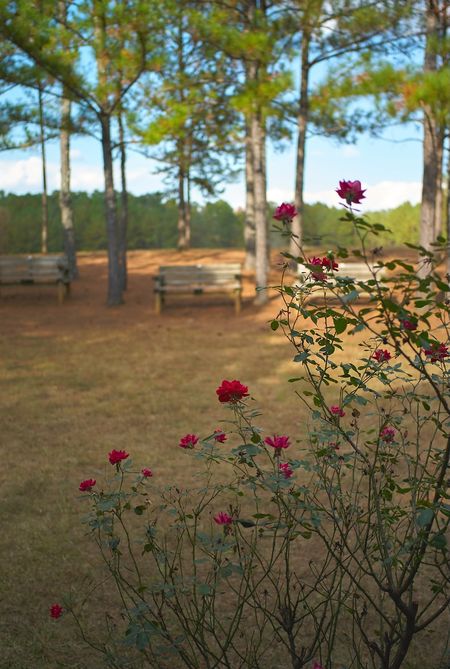 Henry has been asking to go to the park all week, but we’ve had stuff to do most nights. I kept saying “Thursday after school.” I’ve been meaning to have the M8 with me during pickup in order to photograph the afternoon sun coming through the fall-colored leaves on campus. Well, today was that day.

After snapping a few on the Montessori campus, we drove to Amerson. While Henry played, I took a few more photos, including the one here which is my favorite of the day. Again, the Ultron 2/28 shows what it can do, showing that lovely 3D focus fall-off. It really makes these knockout roses pop. I shot a few photos of Henry before we decided to head home.

And since this is one of the last afternoons of Daylight Savings Time, we took advantage of the afternoon light when we got home and hung out on the patio. I took a few of Henry with his new ball. The last four images in the gallery, I put the Summicron 2/35 on the M8 for a bit of a comparison. I don’t have too much to say about the differences in the lenses other than the 35mm is a bit closer with its own set of frame lines. I do like the extra room the Ultron gives me.

Again, all images from this afternoon are in the gallery.

I updated my lens chart, adding a couple to my M8 wish list, like the Leica Elmarit 2.8/24. Even used, this lens is pricy, so an alternative might be the Zeiss 2.8/25. The latter is a bit larger and 25mm is an odd focal length, but this guy is about half the price of the Leica, and I really should have a couple of Zeiss lenses in the kit. This Biogon should bring up the 24mm framelines in the M8 which would give me a bit more room than the Ultron 2/28 and be easier to compose with than the Skopar 3.5/21.

I thought about adding the Nokton 1.2/40 to the list, since it’s only slightly more than the Nokton Classic 1.4/40. The former would give me an extra little bit of speed, but it also appears to have a more modern rendering than its little brother. However, it’s twice as big, too. Too bad I can’t try both. I think it would be really fun to play with the Nokton 1/50 on the SL, but that dude is not only bulky, but expensive.

I also should sell some lenses, like the Ultron 1.8/21, if Giles doesn’t want it. I also have a Takumar 8-element 1.4/50 that could go. Selling these together might get me the money needed for the Biogon or the Nokton, but neither are fetching an impressive amount on eBay.