Every semester in world literature, I teach texts that have as a central idea the subservience of women. Women are necessary in all of these texts in that they have certain roles to play, but beyond that, they are defined by the needs of the men who are the only autonomous figures. In Gilgamesh, women have a mystical connection with nature that gives them a certain wisdom, but their main function is to be the conduit or vessel through which boys become men. In Homer, woman are chattel or witches, enslaved as either willing wives or sex slaves won in battle.[a] This attitude carries over to the later dramas, where women are made to suffer the whims of the men who rule. Since the Romans loved Greek culture in all but name, this treatment of women voyaged to Rome and may be seen in Virgil and Ovid in which women’s bodies bare the indelible mark of their patriarchal oppressors. The foundation of Western Literature is replete with a double standard built on sex and gender myths that we have never quite escaped from.

This is not to say that we should repudiate these ancient works. Nor do I think that the authors of these classics are necessarily advocating these oppressive structures. They are classic works of literature because they critique conventional attitudes and practices and often attempt to subvert them. That does not mean that popular artistic forms of the time did not support status quo; Medea’s nurse famously laments popular art early in Euripides’ play:

These gatherings that the nurse laments that only support the “pleasure of men,” Odysseus praises while he is a guest in the Phaeacian court:

Indeed, cultural values are learned and perpetuated through pleasant tales written by men for, in the nurse’s words, other “men living at ease.”[3] In Homer’s world, this is the center of the community and the foundation of the paideia or educational system—geared toward the construction of the ideal man who is “beautiful and good” (kalos kagathos) on display throughout Homer’s epics. The unspoken part of making men was also assigning woman their roles in supporting this system: vessels for providing male heirs and possessions to be used, traded, or discarded at the whim of their owners. The best that woman could hope for really was, as Medea argues in her famous speech, a “husband [who] lives with us and lightly bears his yoke.”[4]

Cruelty is often manifest in those who seek to excessive control over women’s bodies, and these men often pay with their lives, like Agamemnon and Penelope’s suitors. Still, it seems the biggest threats toward these women are the men in their immediate domestic circles that seek to maintain and perpetuate a patriarchal order the promotes that man as hero (an autonomous, free being) at the cost of a woman’s function as property, or a being who has value only as far as she supports the man: the wife, mother, sex slave, daughter, maid, harlot, bartender. That is, as long as a woman plays the role assigned an expected of her under the control of her man and the patriarchal society, she remains relatively safe. Yet, of she attempts to resist or to subvert the power over her, she is verbally condemned, renamed (bitch, witch, whore, etc., etc.), and then her body is punished with some form of violence, and/or banishment, and/or death. She is only ever protected if she has some sort of divine influence, or her own power, mostly derived some her own ingenuity. However, she is never immune.

Circe is my favorite example from Homer. She has divine parents,[b] which gives her the power to live on her own. She moves to her own island, Aeaea, away from the influence of Mycenaean culture that would attempt to determine her role in society. She gains a reputation for being a witch—of course any woman who would not willingly bow to the whims of the patriarchal society must have something wrong with her—she must be under some evil influence. Indeed, the word evil[c] is not used much in Homer, but here Odysseus as narrator uses it to describe her and her “spellbinding” and “enthralling” powers that seek to “unman” Odysseus and his men.[5] When Odysseus encounters Circe, she mixes a potion: “In a golden bowl she mixed a potion for me to drink, / stirring her poison in, her heart aswirl with evil.”[6][d] The real threat here is that Circe will, in Odysseus’ own words, “take my courage and my manhood.”[7] She uses her wand—her own phallic symbol—to hit Odysseus ineffectually, but he draws his sword and holds it to her throat, showing his is bigger and more potent. She catches on immediately, as it seems that Hermes told Circe that Odysseus would visit and that she would have to change her tactics. She ostensibly submits to him, agreeing to never do him harm,[8] and they fuck.

As far as Odysseus is concerned, he gets the better of her, as I outline elsewhere. Yet, I usually argue in class, that her major act of subversion is curbing men of their aggression, of symbolically castrating them and rendering them compliant and passive, like she did to the predators that make up her menagerie. Odysseus is successful in freeing his men from becoming livestock, but she is able to keep them on her island for a year and keeping the outside world free from the ravishes of their masculine aggression. While she won the battle, her victory is only temporary, as Odysseus’ men convince him to leave:

Odysseus’ admits that “My warrior soul agreed.”[10] Watson makes it clear that the aggressive part of men, even in a hero like Odysseus, always seems to reassert itself and be a constant threat to women. As a punishment for his temporarily forgotten manliness, Elpenor has an accident and dies before Odyssues can leave Aeaea.

And isn’t this the rub? Here, a woman has been a distraction from Odysseus’ responsibility to his men and allowed one of them to become idle, and in his boredom, Elpenor climbed up on the roof, got drunk, and fell breaking his neck. Poor Elpenor. He was fine when doing manly things like raiding the Cicones and raping and murdering their women, but when that aggression is curbed, men lose an integral part of themselves not knowing how to redirect that masculine aggression. Are we doomed to forever be aggressive beasts? Is this not something we can escape? It seems like many of the voices on the Right, emboldened by the dark years of the ’Rump presidency, say fuck this woke shit and re-embraced their inherent masculinity. 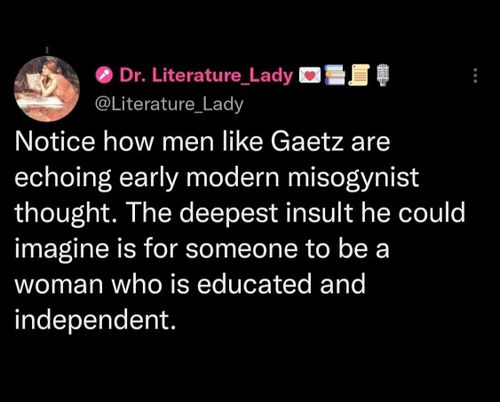 And doesn’t this seem to be what we’re devolving back into? With the Supreme Court about to nix Roe v. Wade,[11] the leaked draft decision by Justice Alito cites Sir Matthew Hale as one of its authorities. Hale was a jurist in seventeenth-century England and was very opinionated about women’s place in society. An unapologetic misogynist, he believed that rape was not something that could happen in marriage, that woman deemed witches should be executed (lending his imprimatur to the Salem witch trials), and that women’s bodies belonged to men.[e] Sound familiar?

While those who support abolishing abortion view this issue as political,[f] it is, like many feminist concerns, deeply personal. Rather than be defined through the lens of masculinity or patriarchy, women are free to decide for themselves who they want to be, both physically and mentally. Yes, many woman are pro-fetus, but isn’t this a choice made for them out of safety? They are secure in their role as wife, or mother, or daughter, and maybe have even chosen this safe oppression as better than a more threatening freedom. Better the devil you know? Afterall, banishment for women in Homer’s time meant a sure death, as those who were banished no longer had the protection of the community. Everyone knows Zeus did his best raping out in the scary wilderness. Similarly, women today as products of the ubiquitous male gaze through technology, religious upbringing, and patriarchal authority often choose that known oppression over an unknown freedom. In other words: they assume the roles they have been groomed for by tradition, unless something interrupts this process, like education. Why do you think the Right hates education so much, doing as much as they can to destroy it before it—gasp!—makes women realize they are people too.

Today, women needn’t follow a traditional narrative of identity. And this enrages men who would not otherwise have to be anything more than a barely-educated, home-town dude to get a wife. When women think for themselves, it’s these men that are increasingly left without a woman. If they were clever like Pygmalion, they could make their own surrogate, but these days they have directed rage outward in an effort to go back to the good-old-days of woman as property.