This month is already getting away from me. Classes start next week, and I’m mostly ready. As it stands, I currently have about 100 students, and that’s likely to grow between now and Wednesday as the push to register warm bodies heads into the final stretch. I’m shocked no on says anything about this. Am I the only one who thinks that 30 students-per-class is too high? Whose life does this make better? Not mine; not the students’. And, I have yet to decide what I’m going to do on the non-journal days in 1101. I’m thinking a tutorial approach where I work one-on-one with students and their writing, like I do in the writing center. Every student has unique writing challenges that a classroom approach does not necessarily address. Regardless, I think they should write for every class. 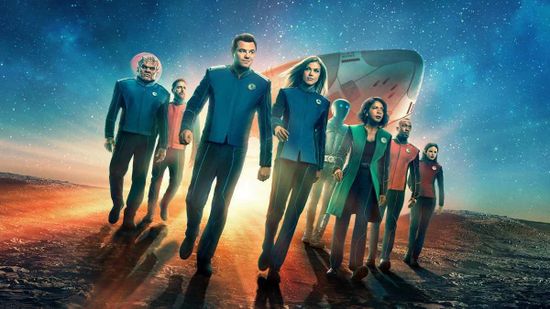 I watched the third season of The Orville, and though they obviously had a budget for effects and music, it’s still kind of a low-rent Star Trek—especially in comparison to Strange New Worlds. The best episodes were those involving Topa and the all-male Moclan culture; Imani Pullum is great as Bortus’ daughter. Another new character whose arc thankfully concluded this season was Charly Burke—an annoying white women with a big chip on her shoulder, I guess representing bigoted-and-bitchy Karens in the 23rd century. Oh, and the characters drink real alcohol. A lot, even making jokes about it. I wonder just how much of Seth MacFarlane’s real life bleeds into the show? The show is entertaining, but it’s such a blatant rip-off of—sorry, homage to—ST:TNG. It had some genuine funny and touching moments this season and, as I already mentioned, pretty great music and special effects. It’s worth a watch.

Both Better Call Saul and For All Mankind are close to wrapping up. The former has two episodes left in the series, and they seem to be setting Jimmy/Saul/Gene up for a final fall which will likely have something to do with the Carol Burnett character. Mankind is just great television with a cool premise: an alternate timeline where the Russians beat the US to the moon in 1969, and each season follows a decade in the continued space-race. This season is going to wrap up the 90s and the first missions to Mars. I wonder if we’ll lose some of the main characters because of age in this season. This is a compelling drama, even if you aren’t into the sf premise.

I’m almost half-way through Alastair Reynolds’ Redemption Ark, the second novel in his Revelation Space universe’ “Inhibitor Sequence.” I’m enjoying this installment much more than I did Revelation Space probably because of the short stories I went through before picking up the second novel. The stories developed crucial background on his world and some of the characters that are a good entry into the series. I think if I had started with the short fiction, I might have enjoyed the first novel more. Redemption Ark is just as epic as the first novel—maybe even more so. It has a couple of returning characters—from both the novels and the short fiction—and a few new ones. This is pretty solid space opera with compelling characters and solid world-building. Reynolds creates a gritty and naturalistic setting that holds both wonders and terrors that almost approaches Dune-level science fiction. Like Dune, I think part of what’s compelling about Reynolds’ world-building is that it centers around different factions of humanity and extrapolates potential futures based on what we might emphasize and pursue as a people. It would make a great TV series.

OK, I have a busy week coming up, and I really want to submit a book proposal. More on that later.