“Shored Against My Ruins”: The Road to Recovery in The Waste Land
A short presentation for the MGA Art’s Festival, 2022

Read The Waste Land, with notes and commentary. View my presentation slides.

T. S. Eliot published The Waste Land in 1922. The poem marked the birth of modernism, an artistic movement that crawled out of the destruction of traditional ways of understanding humanity and its place in the world. Not only had World War I claimed up to 40 million causalities by 1917, the Spanish flu killed another 17 to 100 million people worldwide by the third decade of the 20th century.

Compounding the literal devastation of the global war and pandemic, intellectual certainties also became casualties of intellectual revolutionaries that introduced new understandings about humanity and the natural world. Charles Darwin posited the theory of evolution, questioning humanity’s link with divinity; Karl Marx’s political philosophy questions a social order built on capitalism, class conflict, and materialism; Sigmund Freud’s work on the subconscious dethrones the conscious, rational mind as the dominant force in human cognition; and Albert Einstein’s theory of relativity begins a paradigm shift in physics that eventually overthrows Newtonian physics. The resulting uncertainty compounded by the horror and waste of the war and disease altered the realities of a generation, inspiring intellectual disillusionment and cynicism. The center had been destroyed, and this generation was left in a directionless, valueless void, strangers to themselves and the world. They were described by Gertrude Stein as the “lost generation.” The traditional values of country, church, and family grounded in optimism, idealism, hope, and innocence were lost. This was a time of emotional confusion, chaos, and faithlessness, yet Eliot’s The Waste Land is not one of desperation or despair, but one of potential hope for recovery and a brighter future.

The artists of modernism turned inward to find the truth. As a result, truth became relative, subjective, and personal, lacking absolutes. This fluctuating reality became the basis of modernist interpretation of the universe. The artist must reinvent art to match his/her personal vision. This makes much modern art experimental and difficult, if not impossible, to understand as it is to create. Eliot’s The Waste Land represents this modernist zeitgeist. He portrays the West as physically, intellectually, and spiritually exhausted—floundering for meaning. Wastelanders have lost their connection with their roots—F. Scott Fitzgerald famously described his generation as one in which “all gods [are] dead, all wars fought, all faiths in man shaken.” Eliot’s narrator becomes a knight on a quest for order and value: the holy grail becomes a metaphor a new center and purpose, within the heart and mind of the individual. We must relearn how to live. 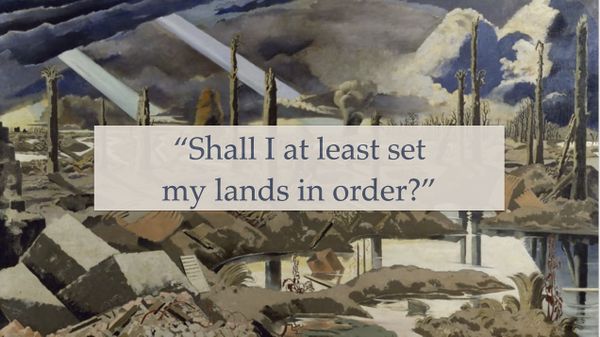 At the conclusion of The Waste Land, the narrator sits on the shore having just traversed the ruins of western civilization and asks: “Shall I at least set my lands in order?” To me, this question has always characterized the thematic emphasis of modernism. It’s a question that Eliot is asking of himself as an individual and a poet, but perhaps more profoundly, it’s one he wants the reader to consider as a tacit fellow traveler along a road in a new world with no signs and no maps.

So, how we we find meaning in the rubble of Western civilization? Eliot posits an approach in what he calls the “mythic method.” The mythic method looks to the past to glean meaning and understanding for what has been lost or destroyed in the present. It emphasizes the underlying commonality of disparate times and locations by employing a comparative mythology to transcend the temporal narrative. By stressing the mythical, anthropological, historical, and the literary, this method becomes at once

The mythic method does not offer an escape to a better past, but an entry to a confusing present. The voices of the past mingle with fragments of modern life that the reader must then interpret and order to produce meaning. Readers must structure the discontinuity and make their own connections within the text in a sort of quest, rather than being lead by narratorial authority. The Waste Land suggests that we must existentially create our own meaningful world—this becomes the new definition of freedom for the twentieth-century artist.

Some Themes in The Waste Land

In a way, The Waste Land is a journey narrative, like those works of the past that also grew out of disruption, including Homer’s Odyssey, Dante’s Divine Comedy, and even Joyce’s contemporaneous novel Ulysses (also published in 1922). Late in the poem, Eliot’s narrator states, “These fragments I have shored against my ruins,” challenging us to do the same. Eliot’s method highlights the reader’s participation by diminishing the authoritative voice of the poet. Echoes from history and literature mingle with fragments of modern life that the reader must then interpret and order. The reader must structure the discontinuity and make her own connections within the text in a sort of quest, rather than being lead by the narratorial voice.

Eliot’s authorial voice plays the role that Virgil does in Dante’s epic: orienting Dante in a strange, new world before leaving him to pursue his own path. Eliot's narrator is like a tour guide in hell, pointing out fragments in the rubble that might help along the road, but placing the burden of meaning upon the readers. The Waste Land’s thematic quest is linked with the reader's recognition and understanding of its discontinuous fragments. The poem is a language experiment, refreshing and renewing in its flow of verbal associations that disrupt the controlled and precise poetry of the Victorians. It echoes musically and free, like the flow of the Thames to the sea, not constrained by stifling literary conventions and traditional expectations. This is what makes Eliot difficult, but rewarding.

The Waste Land disrupts many of our expectations, especially on a first reading, and resists our attempts at a unified reading. Its genre seems confused, more of a poem of the not-yet than one that we can comfortably inhabit. Indeed, Eliot seems to capture the modernist zeitgeist: that of crisis and rupture—the sheer absence of one, totalizing view of the world. One voice can no longer provide answers for all. Eliot shows the impossibility of one stable voice by mixing wit and humor even in the face of horror. The Waste Land is anti-heroic and unromantic, nightmarish and fantastic, realistic and dreadful, mundane and otherworldly. Even while we catch glimpses of the comfortable, Eliot never lingers long, confronting the reader with new multiplicity.

While the poem seeks stability, it only suggests a road to recovery, like a directive from the sky. In the final section, “What the Thunder Said,” the knight/narrator receives some direction: begin with “generosity,” “sympathy,” and “self-discipline” to recenter our values and give meaning to the external chaos. The Waste Land ends with three repeated Sanskrit words: “shantih shantih shantih” which Eliot explains comes from the formal ending of the Hindu Upanishads, meaning “the peace which transcends understanding.” Perhaps this is a hopeful ending, but not without a degree of confusion, uncertainty, and alienation. Maybe choosing to set our own lands in order, to shore those fragments against our ruins, might bring peace and acceptance. However, those fragments and voices will always echo, allowing only brief comfort, if any at all. Practicing generosity, sympathy, and self-discipline might be the beginning of the mythology of modernism, one that still might offer direction in our own recovery 100 years later.