In the fall of 2006, I was invited to speak about literary studies in the digital age at the conference of the Norman Mailer Society. I had been an Assistant Professor for a couple of years at a small college in central Georgia. Having moved from Tampa, I was still struggling with some of the cultural differences in my new home. For example, during my second year, my chair and I were summoned by the Provost. She had received a letter from a local busy-body complaining about my “unprofessional behavior” in public: likely a conversation about religion or politics she overheard at Chili's. Yeah, living in the south was an adjustment—one I’m still making almost twenty years later. 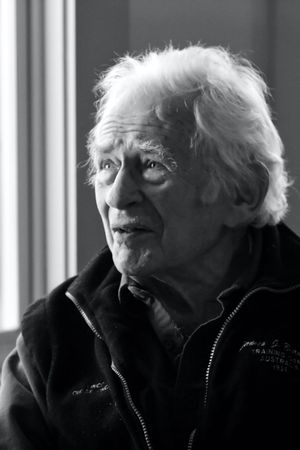 A photo I took of Mailer during the 2006 conference—the day I met him.

Phil Sipiora, my mentor in gradate school, reached out to encourage me to attend the Society conference in Provincetown. I was a bit apprehensive: my experience with Mailer’s work was minimal—I had read An American Dream with Phil as a graduate student, maybe ten years earlier, but that was about it. Mailer had just published A Castle in the Forest and The Big Empty—both were “required reading” for the conference, according to Phil. I agreed to attend, so I started looking into Norman Mailer. I was impressed with his oeuvre, and his hard-hitting approach to culture—especially his writing in the sixties. Yet I was taken aback by his critique of digital technology and what he saw as its deleterious effects on our society. Being a computer nerd is what got me my tenure-track job, so he and I were in disagreement about this.

Arriving at the conference, I felt like an imposter. I had managed to read The Big Empty before attending, but I knew little more. However, by the end and despite being a neophyte, I had made many new friends and colleagues, and little did I know then what impact on my professional life Mailer’s work would have.

On Saturday night, Norman and Norris hosted the conference attendees at their house on Commercial Street. By this time, I was starting to fit in, enjoying the atmosphere and conversation as the evening wore on. Mailer sat in this regal rattan chair while people queued up to speak with him for a few minutes each. I was reluctant at first, but as the line got shorter, I thought what the hell.

I introduced myself and was honest with him: I was just getting familiar with his work, and I was a computer aficionado. He turned to look at me out of the corner of his eye and asked me where I was from. I told him I live in Macon, Georgia, why I was there, and how I rubbed many people the wrong way. He chuckled at that, but sympathized with my plight. Even after speaking with all who came before me, he was kind and gracious with his attention, and we chatted a bit longer.

When I felt I had used my allotted time, I asked: “Which of your novels should I teach in the spring?”

He thought for a second and said with a mischievous glint in his eye: “I’d teach the new one: it has something in it to piss everyone off.”

This was my one-and-only meeting with Mailer; he died a year later. Yet, this experience left a huge impression on me, and I have come back every year since. I also know a bit more of his work now. Thanks, Norman, for all you’ve given us—especially works that make us uncomfortable.