Rain! It was inevitable, I guess, but a storm is moving through this morning. However, it looks like it will pass by late morning. There’s a continued chance of rain all day here, but, as I have told others, that is part of the motorcycling experience, and I cannot let it worry me too much. Still, I’m going to take my time this morning to let the large mass of green pass to the east. This delay will probably keep me from getting to Roanoke tonight, but I’ll see. 300 miles over twisty mountain roads might have been too ambitious to begin with. And I’m afraid the ride will be a bit chilly today.

Even though the sky was threatening to open up most of the morning, the potential rain was never the issue. Apparently, the entrance to Shenandoah NP at the northern end was closed, and my GPS knew it. So rather than deliver me to a cloudbank, it routed me around. I thought it weird that the entrance was so far from Front Royal, but I continued to trust the GPS—for now. Eventually, it delivered me to US-211 west, leading to a more southerly entrance. As the road climbed, I could tell the clouds still haunted the summits, for as I came to the Shenandoah NP sign, I couldn’t see 30 feet in front of me. I continued along US-211, figuring I would head south for a bit more before trying again. Surely, the clouds couldn’t hang out all day.

By the time I started riding south on US-340, the sky was clearing and the day started warming up as Helios made an appearance. I thought I would go as far as Elkton, then head east on US-33 to try to get into the park. A bit before that, my GPS told me to head east, so I thought it might have a route I didn’t see on Google Maps. I took me down a residential road, but plenty of similar roads in Pigeon Forge leads to routes through the Smoky Mountain NP, so this did not concern me. Besides, I thought, I do have an adventure bike. As the houses thinned, the pavement started getting rougher. Soon it ended all together, and I was riding on gravel. No problem, I thought, the GPS said I had only a couple miles of this until I hit Skyline Drive, the only artery through the park. After a bit more time and slower progress, I could see no more houses, and the road path was climbing the mountain. I could see switchbacks ahead of me, but, the BMW R 1200 GS can handle it. After a sharp left turn, I ran into a barrier stretched across the path and a sign: “Offical Use Only.” I thought I might be able to get around it, but should I? By this time, I was 25-miles into this detour and did not relish the thought of turning around. However, since I am ultimately a wuss, turn around I did with a curse, thinking I just wasted an hour. Thanks, Garmin. 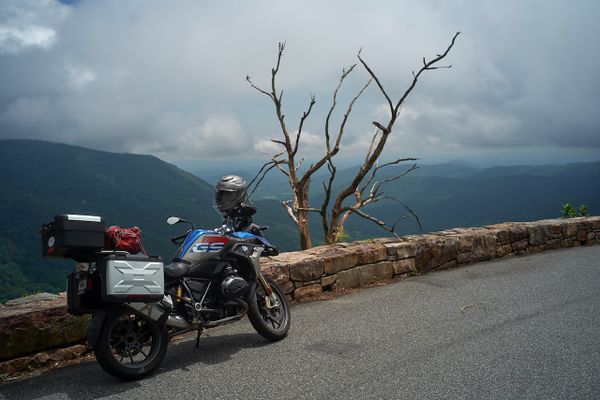 I finally reached US-33, and the clouds had cleared, so I entered the park at Swift Rung Gap. Now I see why the gravel road was blocked off: they wanted to collect my $25. I was so irritated that I accidentally popped the clutch and stalled the bike with this ranger looking at me. I paid—what else could I do—and finally entered the park. The road was lovely and little traveled; I wonder why. Some clouds slept like mythical beasts on the mountains around me, but I did not have any troubles. I had about 50 miles mostly to myself, but by the time I reached the end, I was really tired and the day was getting long. Even though the “Blue Ridge Parkway” sign called (I was near Waynesboro, VA), I was tired and had 100 miles or so left to get to Roanoke, VA. So, in another disappointing move, I hit interstate 81 south. It was grueling, but I made it to Roanoke about 17:00.

I checked into the Springhill Suites, and walked to have dinner at Fork in the Alley recommended by the hotel clerk. The walk was about a mile through the park, and even though I was tired, the exercise was pleasant. I had a brick-oven pizza and a local IPA; both were good, though I ended up taking most of the pizza back to the room with me to watch TV. I was supposed to chat with Kip tonight, but I am beat. Tomorrow’s ride is all Blue Ridge to Asheville.