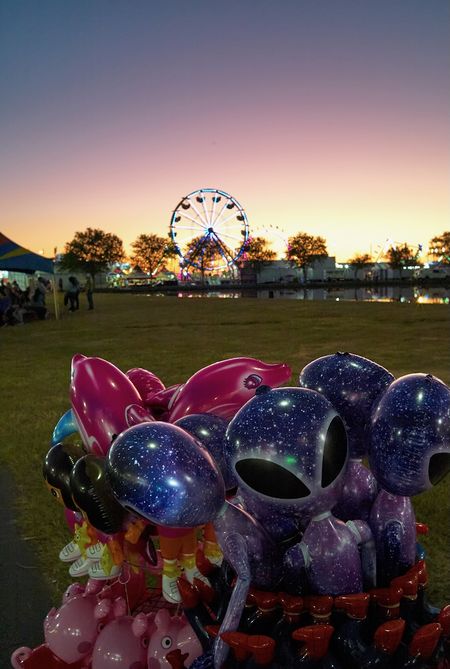 Lots of people had the same idea. Maybe all of central Georgia was here tonight. I was uncomfortable driving in, but Henry was excited to return to the fair. I was pretty amazed that Autumn—the most cautious masker that I know—was fine swimming with this tsunami of humanity. After seeing Henry on some ride full of joy and excitement, I can see why she took the risk. The kid had a blast. I think this is evident in a couple of the photos in the gallery.[1]

We met Adeline and family shortly after arriving and hung out with them for a bit. Adeline was in a mood, so she did not ride on anything with Henry, and we pretty quickly parted ways while Henry joined queue after queue; the kid was on a mission. I couldn’t help but smile to see his joy.

That said, I hate the fair. Shocking, right? After we lost the sun, it began to get cold, and as Autumn and I were really just standing around waiting on Henry, the chill burrowed to our bones. The press of people was overwhelming at times—the smells, the cigarettes, the noise, the lights—I’m certainly too old for this. There was no respite, and I was getting colder. Eventually we managed to get Henry back to the car without the toy sword he wanted so badly.

Leaving was a literal clusterfuck, proving we are really just irrational animals. First, we sat in the car unmoving got an hour-and-a-half queuing to leave. We were well into the field they used as a parking lot, so we couldn’t see if there was any movement at all. We kept our cool for a while, before I became Lewis and Clark to see if anything was happening in the west. I could see movement, but so many people were leaving and we were deep into the lot, that those who were closer to the exit were the ones able to escape. I returned to the car, and Henry was getting more impatient. As cars started to inch forward, everyone had returned to their cars which turned it into a free-for-all. I’m certain I came within inches of being hit. Henry eventually fell asleep, and we finally got moving toward midnight.

I will not be returning to the fair. However, I think we do need to take Henry to some theme parks. Maybe these will be more tolerable to the his dad, the old curmudgeon.