Following this tutorial by Raid Owl, I installed a reverse proxy on one of my virtual Ubuntu 20.04 servers and created a LAMP stack on another to run some web sites.[1] I installed Ngnix Proxy Manager in a Docker container, set up a new domain name, lucasfam.net, through Cloudflare, and had it working perfectly with SSL certificates in no time. Awesome. I later did the same for grlucas.com. I just have to figure out what to do with the latter. I’m sure to think of something. I did point home.lucasfam.net to my Synology server, but I may change that.

I also installed Heimdall via Docker. It’s a cool application dashboard that will take over for my pretty lame start page. It’ll only work on my lan, but I only need it there. It looks and works very well.

Yesterday, we received the laser printer I ordered from CDW for $100, and I set it up. It’s an HP Laserjet M209dw, and it just works. I like that it has ethernet, so it was easy to add to the network and will work with any device. I didn’t like how I had to install a large software package to make it work, but whatever. Hopefully it will not give us trouble like the old Canon ImageClass did. Along the same line, I reinstalled the scanner and digitized a whole stack of papers. How satisfying. 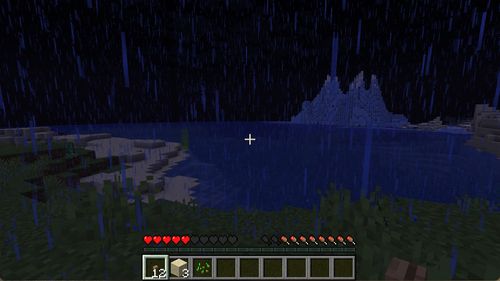 A stormy evening right before I was slain by a zombie. I’m not sure that’s supposed to happen in a “creative” world.

Next, I installed a Minecraft server on my Docker server. The server itself was fairly easy to get running, but setting up a client for Henry was practically a nightmare. How come anything that Microsoft touches gets overly complicated, like a bureaucracy? Again, I followed Raid Owl’s tutorial and made some tweaks myself.[2] I struggled getting the whitelist working at first, but figured out how to add it to the docker-compose file with the help of the container’s documentation and this guy’s overview. Henry was looking over my shoulder the whole time, so the process seemed to take forever. Eventually we had the client installed on the iMac, and he was digging and battling creepers in no time. I made an account, too, but I got bored pretty quickly. I really should learn it a bit so I can help Henry. He’s already asking his friends to join his server. Man, was he thrilled.

I’m happy to report, too, that all of the services I have set up so far are running well: a couple of Piholes for high-availability, Windows 10 and 11, and my media apps. My network is now Raspberry Pi-free, not that I had a problem with those, but virtualizing is my new jam. I still have a bit to learn on TrueNAS, but what I’ve set up is working nicely. I have yet to implement a solid backup strategy, but I will soon enough. The only other server I want to set up is pfSense. I’m hesitant to do this because I don’t want to mess up what I’ve already done, but I know running pfSense as my firewall will be a cool upgrade. I just have to do it when the wan connection can be down for a while.