Wow! I could not really have asked for better weather or a better way to top off today’s ride but over the Chesapeake Bay Bridge. Both were stunning. While the temperatures along the whole route did not climb above 82° F, it dropped ten degrees as soon as I got on the bridge. Those seventeen miles over (and under!) the water were cool and lovely. The bridge actually reminded me of the long bridges connecting the Florida Keys—though I’ve yet to ride to Key West. 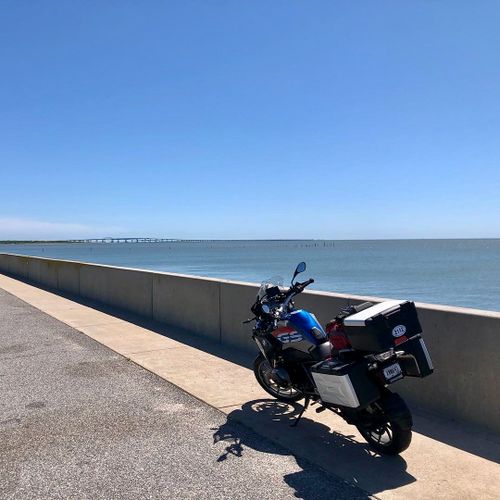 I had a great morning: breakfast with Walter and Garet. Yes, Garet came over from Chapel Hill to hang out for the evening—I’d not seen her in about 20 years. We had a leisurely morning and chatted about life and politics over omelettes and coffee. I started my ride about 09:00.

The first part of the ride was fairly typical: about 130 miles on interstate, both I-95 and US-64. I got off the interstate at a little town called Everetts, NC, and the roads were lovely: newly blacktopped and rural. I had some two-lane roads, but getting back on US-17 (soon to be I-89) took me to the not-as-fun four lane highway. It eventually snaked northward through eastern North Carolina; I even passed a wind farm. I stopped for a rest just before entering Virginia at Dismal Swamp National Park.

Almost right over the state line, I hit the interstate around Norfolk. This is the most traffic I’ve seen on the trip so far, but I managed to get around the east of the city to the bridge. Magically, traffic disappeared and the ride became sublime in an instant.

I checked in to the Cape Motel just after 15:00, unloaded my gear, and rode up to Cape Charles to check it out. It is a quaint beach town with shops, a beach front, and families riding around in golf carts. I got a to-go sandwich to take back to the room for a night of The Boys. The final leg to New Jersey is tomorrow.

I had a thought while riding today. In One Flew Over the Cukoo’s Nest, Key Kesey uses a metaphor of the combine to represent contemporary America. It’s a violent image, if I remember correctly, of this huge machine that just eats and combines everything so that it’s homogenized and benign. This is what corporations do: they make everything the same. In some ways, this is appealing: it makes life predictable and comfortable. How lovely to see familiar stores, restaurants, and hotels when we’re in unfamiliar territory, like when traveling. I thought about the combine today when I saw the same places lining unfamiliar roads of eastern North Carolina. It made me a bit sad. What’s the point of traveling unless it’s to discover the new, the unfamiliar, the uncomfortable?

A little further down the road, in the middle of an open field under a big sky, a wind farm whirled majestically stretching west—something I do not see everyday. It was beautiful. Not everything is the same. Not yet.