What to Read? Reynolds or Asher?

Between novels, Norman Mailer wrote short stories, and he wasn’t proud of it. I’ve been teaching a novel course this summer, so my novel reading has been relegated to those that I assigned. As a consequence, I don’t feel like I’ve read anything this summer, since summer is when I get caught up with some science fiction. Since I’m reading novels for work, I’ve been reading short stories for fun—mostly Alastair Reynolds and Neal Asher.

I read Reynolds’ Revelation Space last summer (I think), after I had been reading Peter F. Hamilton’s Commonwealth novels. Reynolds and Hamilton have very different takes on space opera: the former’s is darker and more austere, influenced by cyberpunk and pretty strictly hard sf; his galaxy is immense, full of voids, empty spaces, and mysteries because of relativistic travel, with only a handful of characters. He has prodigious spaceships and Dune-like races of humans—the Ultras, the Conjoiners, the Demarchists—all products of technology and political-philosophical movements that fragmented humanity, it seems, well before the events Revelation Space. There are aliens, too, who are mostly extinct, but who have left their influence on the galaxy, like the Inhibitors and the Amarantin. I feel like there’s more hidden than explained in Reynolds, making his novel more opaque and gritty.

Hamilton’s Commonwealth is a more Star Trek-like universe, full of technologically sophisticated civilizations connected by a network of wormholes. Space travel is mostly missing from these earlier novels; instead trains carry passengers between worlds through wormholes. People rejuvenate and become essentially immortal, and the economics system seems to be capitalism on steroids. His aliens are few, but very interesting and interact with humanity in specific ways. Hamilton’s style is clear and easily digestible; he uses many characters to paint a huge tapestry in War and Peace-length novels. I really enjoyed reading Pandora’s Star and Judas Unchained as the central arc was engaging with an epic feel, a satisfying payoff, and a mostly optimistic view of humanity’s future. While his second series in the Commonwealth, the Void Trilogy, was also good, I almost put it down a couple of times, growing tired of similar prose and what felt like interminable story lines. The ending paid off, but I felt even more like Hamilton needed an editor on this second series. 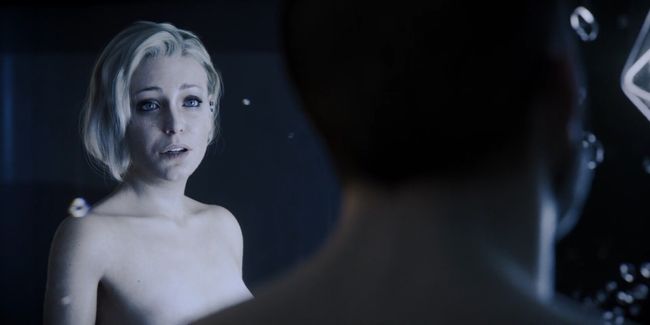 A still from the Love, Death & Robots’ version of “Beyond the Aquila Rift.”

I think because I was in Hamilton headspace, I didn’t enjoy Revelation Space as much as I should have when I read it. Well, I picked up his short story collection Beyond the Aquila Rift after seeing the Love, Death & Robots’ versions of two of his short stories, “Zima Blue” and “Beyond the Aquila Rift,” which were excellent. Well, the stories are even better: both are kind of dark and muse philosophically about the nature of memory, nostalgia, and reality. “Fury” is a detective mystery with a 30,000-year-old robot, echoing the eponymous robot in “Zima Blue.” “Trauma Pod” is just cool, and I must note, very teachable.

Next, I read the stories in the Revelation Space universe. Great Wall of Mars is really a novella that shows the genesis of the Conjoiner movement on Mars. It’s an action-packed story with mechanical worm infestations, political intrigue and perfidy, metaphysical brain implants, and a truly heroic protagonist. It’s a great introduction to the RS universe—perhaps the one I should have started with. This story alone makes me want to read more novels in the universe. I also read “Weather,” an Ultra/Conjoiner love story that develops more of the latter’s culture and technology, and “The Last Log of the Lachrimosa” whose Ultra characters were similar to those in Revelation Space—complete with a surly captain and ancient aliens. Great stuff. Diamond Dogs is also in this collection, and I plan on tackling this novella next before moving on to Redemption Ark.

That said, Walter has been touting Neal Asher for a while. I’m familiar only with his novella The Bosch, but I did enjoy that—very reminiscent of Paul di Filippo’s Ribofunk stories set in his Polity universe. Walt told me to read The Engineer, a novella-length entrée to his Jain trilogy. Man, it’s good. Again, it’s action-packed space opera with ancient aliens, warring human factions, big spaceships, servitor Golems, AIs reminiscent of Iain Banks’ Culture AIs, and Cronenberg-level body horror. Asher’s style is a bit more abstract than either Hamilton’s or Reynolds’, leaving more to the reader to fill in gaps and make connections. I don’t feel like his characters—particularly the important minor ones—are as fleshed out, but his world-building feels detailed and complete. I’m currently reading “Spatterjay,” and it’s like the Jain homeworld in The Engineer—replete with crazy alien creatures that make humans seem like a low, weak link on the food chain.

So my problem now is: do I continue with Reynolds or Asher? I’m leaning toward Reynolds...