After an unavoidable delay this morning, I headed out to Columbus, GA, on the BMW R 1200 GS to get some new shoes. After my epic ride in June, the GS’s front tire especially looked a bit threadbare. I probably could have squeezed another few miles out of it, but I figured I should take care of this before my ride at the end of the month to Florida. 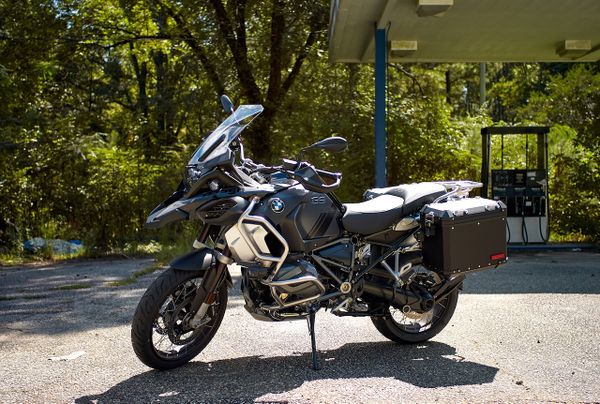 After almost running out of gas—a word of advice: if you think 96 will have plenty of gas stations being a four-lane road and all, think again!—I made it to BMW of Columbus (AKA Extreme Motorsports) about 14:00. I checked in and gave them the keys, and I took helmet and camera bag to find a place to wait. I was immediately distracted by the several new GS Adventures they had in the showroom, particularly taken with a triple-black model. As I gazed, a salesman asked if I wanted to take it out for a little while. I thought he was joking at first, but we started chatting, and he told me that he can ride any bike he wants to home at night. He then began to laud the GS I was looking at and convinced me to take a test ride—it was like convincing Henry to have some more candy.

He showed me a circular route that looked to be about 15–20 miles, and I was off. I noticed immediately that the seating position was a bit more forward than my GS, but this might have been because of the higher seat. It’s a physically bigger bike, but it felt a bit more agile. The 1200cc engine was more refined and had power-all-day—I think I barely got out fourth for the whole ride. The road was OK and I was able to get a bit aggressive, but because I stopped for some photos, I ended up behind three school buses at one point.

It was fun. I was even daydreaming at one point about the numbers, and it would be the height of stupid to buy this motorcycle. I also thought, especially after getting my GS back, that the differences between the two are really negligible. My GS is a great bike, and I do not need to replace it anytime soon. If anything, riding the latest just proves how good these bikes have always been.

Despite the protests of my GPS, I retraced my steps from the test ride, and went back up to GA-315 to head east. It took me back to Talbatton, then GA-80 to Macon. By 17:00, I was beat with a half-hour left to ride. Still, the day was lovely and the ride was stunning both ways. It would have been nicer to take my time, but I’m glad I was able to take a half-day for a somewhat impromptu ride. It was good for the soul.