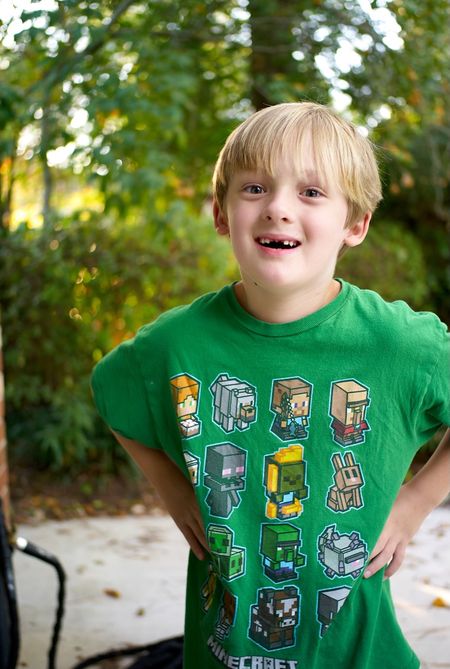 Apparently, today is National Sons Day—who knew? To celebrate my number one son, here’s a photo of Henry I took yesterday during golden hour. Man, this Ultron 2/28 sure is sharp, and the colors I get from the Leica M8 are just lovely. Notice the setting sun’s highlight on his hair and cheek. And, I actually got a genuine smile this time. (Sorry for the stupid garden hose in the background—my composition looks like I was trying to include it. I think I was just trying to get more of the leaves and sunset in the background. Rookie mistake.)

Today, Henry was caught in a big lie. Yesterday, he brought home a little homemade blue doll. He showed it to me when he got in the car, very proud of his creation. It was made out of felt-like material, stuffed, and hand-sewn into the likeness of a little blue guy wearing a yellow crown that I mistakenly called his hair. Henry told me he made it, and it was really well done. He was obviously proud of it, as he carried it around all night, even posing for a couple of photos with it, including this one. When I went to pick him up from camp today, Miss Jenny came to meet me as Henry collected his stuff and told me that someone else had made the blue guy and that Henry had taken it out of her cubby space. That day, they had all searched for the missing blue guy until Henry finally admitted taking it. Jenny told me that she didn’t want to make a big deal about it and that Henry did apologize.

I feel bad for Henry. That had to be tough, and I can certainly sympathize, as I sure told my share of lies as a kid and stolen random stuff. I told him as much as we talked about it later over his Burger King kid’s meal. He apologized to me and said it wouldn’t happen again. I hugged him and said it was OK—that we all make mistakes sometimes. The important part is that he was honest in the end. I never feel like I handle these situations right, but this one I felt pretty good about. That said, Henry seems reluctant to return to camp tomorrow, as he will have to return the blue boy to its owner. Sorry, son, but it needs to be done. It’s lessons like this that help us better ourselves.