The conference ended about 15:00, and I was on the BMW R 1200 GS shortly after heading west. The conference was great, but I was happy to be traveling again. My GPS gave me a three-hour travel time—about two-hours shorter than I thought—so even though I’m getting a later start, I should still arrive at a reasonable hour. Even with some bottlenecks, I managed to get to Silver Spring by 18:30. Yes, it was all interstate, but I had already had a long day at the conference, so I just wanted to get there.

I woke up early this morning and packed the bike. Walter and I went to the front desk to divide the bill, but they couldn’t do it. “All charges have to be on one credit card,” she told me. They best they could do is print the same receipt twice: one with my name and one with Walt’s. However, my credit card kept the whole charge. That should work out OK, but thanks, Radisson. What is it with hotels in New Jersey? 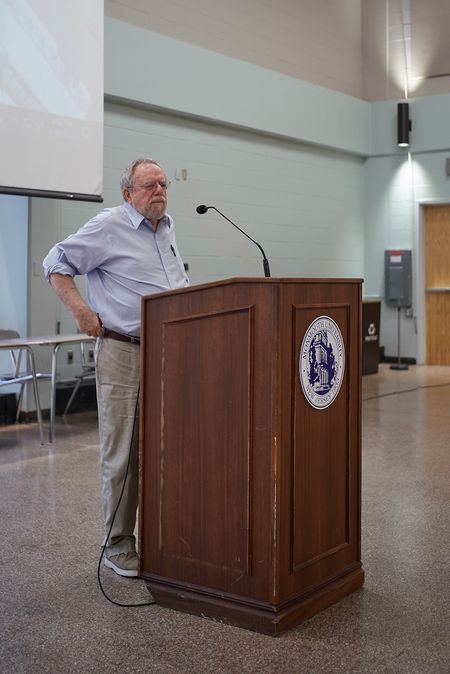 I rode to Monmouth and set up the room. I was on the first panel with Phil and Matt, and I think it went well. Phil joined us via Zoom, but the panel was well received. I even got a thumbs-up from Mike Lennon. The next panel discussed teaching Mailer, and Matt, Maggie, Nicole, and I talked about strategies for classroom approaches to Mailer’s work. I got to show off my grad student’s “good” article on Wikipedia: “The Faith of Graffiti.” We ended the morning session with the Wilkes Readers’ Theater with an imagined college interview with Mailer written by Bonnie.

Lunch and the keynote were both good: Denby’s talk suggested a theme in Mailer and his work, tying together The Fight, Mailer’s stabbing of Adele, and Mailer’s portrait of Oswald. Each, Denby argued, suggest that violence in men at that time could be triggered by questioning his heterosexuality and virility. His talk was speculation, but one he seems to avocate in his writing. Yeah, he talked about the stabbing at a Mailer Society conference. Risky, but here it paid off as we are not a cult, but a society of enthusiasts that understand Mailer was not perfect.

Mailer conferences are always rejuvenating for me. They are hard work, but I always leave with a new sense of purpose and drive. All of the members are creative, productive, and passionate about their work, and it really shows. In a way, I feel inadequate to be counted a member of their community, but they push me to be a better thinker and scholar. Also, they are all friendly and supportive. This is why I have been part of the society for almost twenty years. While we had some challenges coming back to face-to-face conferences, we pulled it off—mostly Maggie, our president, pulled it off. She is not only one of the smartest people I know, she is a true professional, and I am privileged to call her my friend. Thanks, Maggie, and to all the members of the Norman Mailer Society—I’ll see you all in Austin next April.

Check out the few photos I took in the NMS Conference 2022 gallery.

Tomorrow, Ernest and I are hanging out. I’m looking forward to seeing him.